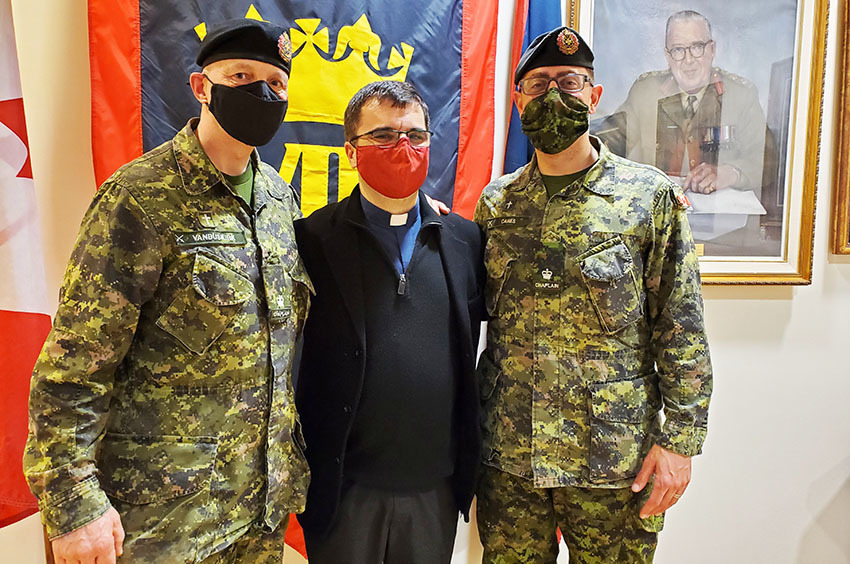 The Rev. Rob Salloum was enrolled as chaplain of the 8th Canadian Hussars B Division on May 6. That was the easy part. The hard part awaited him in July.

Basic training, held mostly in Moncton rather than Quebec due to COVID-19, was demanding.

Candidates were up at 5 a.m. and on some days, running or marching with a full pack by 5:30.

“As a 53-year-old guy, I certainly underestimated what you go through,” he said. “I was tired out a bit.”

Despite the demands, he is quick to point out the time was right for him.

“I couldn’t have done this 20 years ago,” he said. “I now have the maturity to fulfill this position that I didn’t have 20 years ago. I’d advise anyone to first go into parish work.”

Much of basic training is learning how to leave oneself behind in order to become part of a well-functioning unit. Tasks impossible for one become doable together.

“The whole point is to work as a team, to rely on each other,” he said, adding that learning how to deal with stressful situations was another lesson well-learned.

During one seemingly impossible task, he found himself “freaking out.” Then someone said, ‘Padre, don’t worry, just think.’

“You learn to keep your head in all situations,” he said. “That’s helpful advice in a parish.

“There’s certainly a lot of skills I’ve acquired and am developing that are transferrable across the two professions,” he said. “What I’m developing in the military I’m using in the parish.”

He is thankful for the support of his parish in taking this step. But why, at 53, did Rob decide to become a military chaplain?

The Rev. Canon Chris Vanbuskirk is a major in the Canadian Armed Forces Reserves, and a fellow Moncton priest.

While Chris did offer encouragement, being a military chaplain has been on Rob’s mind for years. He had talked about it with retired chaplain Walter Williams, and his family heritage played a big role.

“My grandfather was a padre in the Second World War,” he said, adding that he was pressed into service as a navigator and flew many missions over Normandy, never to return.

Now that he’s a captain in the Reserves and a military chaplain, Rob has regular duties to fulfill. Every Thursday night and one weekend a month, he and his unit are training.

But his role is a balanced one. While he’s a soldier, he’s also an advisor to the commanding officer, and a strong support for the members of his unit.  Being a listening ear for fellow soldiers is his most practical role.

“It’s like having a meal together,” he said. “Walls come down as they get to know me.

“They keep talking about it being a family. I’ve seen it. It’s true. It is a family for sure.”

In forming a list of retired military chaplains in the diocese, we have come up with these names: Walter Williams, Wally Corey, David Keirstead, George Ackerly, Don Trivett, Ellis Jagoe and Malclom Berry.

If you know of others, please send them along to the editor: gmcknight@diofton.ca .

PHOTO CAPTION:
Padre Rob Salloum, centre, was enrolled May 6 as the chaplain of the 8th Canadian Hussars B
Division. With him are fellow Anglican priests and chaplains Chris VanBuskirk and Michael
Caines. Rob takes on the role Chris held before his promotion.  Submitted photo

As an aside, many New Brunswick Anglicans served as chaplain in the Great War, usually on leave from their parish. Their correspondence from locations in England and France back to the chaplain general is available in at Library and Archives Canada in Ottawa and makes interesting reading. Henry Montgomery, born in my own parish, thought his family set a record with six sons and himself overseas as well as a daughter serving as a military nurse.