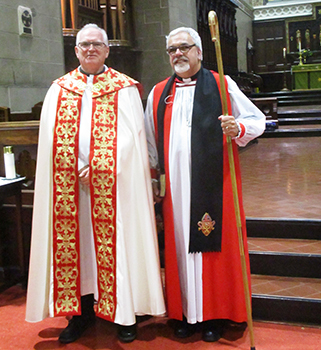 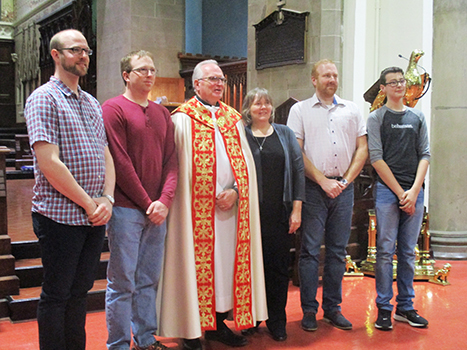 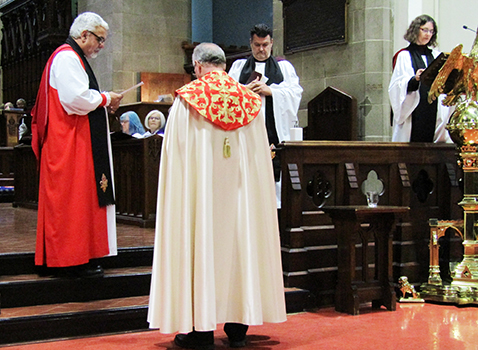 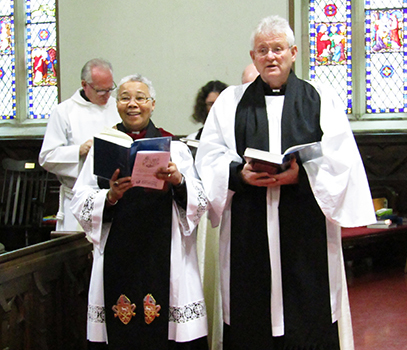 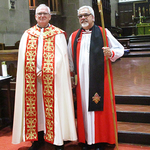 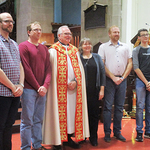 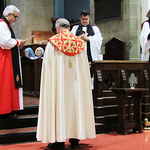 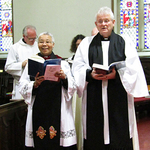 A large busload of parishioners from the Bathurst area was on hand for the Choral Evensong, as were Sandy and Brenda’s three sons.

Bishop David Edwards preached, and began his sermon by recalling the many times he and Janet attended British automobile shows, “to look at every car and truck ever made,” he said.

The one vehicle for him that made it all worthwhile was the Morgan car.

“Every year I would go and look at the Morgan stand,” he said.

“To me, it was better than the Ferrari Testarossa. If there was a pearl of great price, it was a Morgan,” he said, referencing the second lesson from Matthew 13.

Then his friend, Cliff, bought a Morgan and invited David for a ride.

“This thing can go 185 miles an hour in a straight line,” he said, adding that Cliff offered him the wheel.

“It took the whole of my being to say no,” he said. “With so much power, I’d probably crash it, so I passed up the opportunity.

“It’s that kind of passion we just heard about,” he said, again noting Matthew 13, which begins “The kingdom of heaven is like treasure hidden in a field…”

All of us can understand that there is something just beyond our reach, he said. For him it was a Morgan. For Christians, we give all we have just to be part of the Kingdom of Heaven.

“We must truly understand what it is to be followers of Jesus,” he said. “It’s worth giving everything.”

As a young man, his heart’s desire was to be a lawyer, and if he were a lawyer, he could have afforded a Morgan, “but God had different plans and said, ‘walk this way.’”

“What are we willing to give God to know the full generosity of God?” he asked. “The wisest thing we can have is a relationship with God. I will ‘walk this way’ no matter what.”

But even today, we think we must give up all our possessions to follow God and live some crazy life, “but God says ‘No. You are to use what I’ve given you.’

“God has never blessed me with vast amounts of money,” he told those gathered. “What? I wouldn’t blow it! I’d keep it to myself. You’d need a wrench…”

He told the story of Outflow Ministry and its leader Jayme Hall. As the group was setting up the men’s shelter in Saint John a few years ago, a man came to him and asked what was needed. After a bit of back and forth, Jayme said the mortgage was $96,000.

The man took out his cheque book and wrote the amount to pay the mortgage.

‘God has given me the tremendous talent of making money,’ he told Jayme. ‘And he’s also given me the desire to help good projects come to completion.’

“He has a pearl of great price,” said the bishop. “But I’d not have written that cheque.”

What do we put under the authority of God in order that God can use it and that others can see it, he asked.

“Today we celebrate with Sandy,” said the bishop. “Each of us is called to ‘walk in the way’ — to follow wherever he leads.”

The bishop thanked Sandy and Brenda for their faith and willingness — for putting themselves under the authority of God to be used by him. He prayed God’s blessing on them as they take this next step.

To be collated an archdeacon, you must first be installed as a canon of the Cathedral. The Ven. Cathy Laskey read the instrument of appointment. After Sandy declared his willingness to faithfully discharge the duties of a canon, Bishop David and Dean Geoffrey Hall led Sandy to his respective seat in the Chancel and declared him a canon.

Virtually the same process then took place to collate Sandy as an archdeacon. The final element of the ceremony was him donning his new cope.

After the service, Sandy and his family posed for photos and everyone enjoyed refreshments at the back of the Cathedral.

Find A Church
Chatham
Comments for this post are now off.