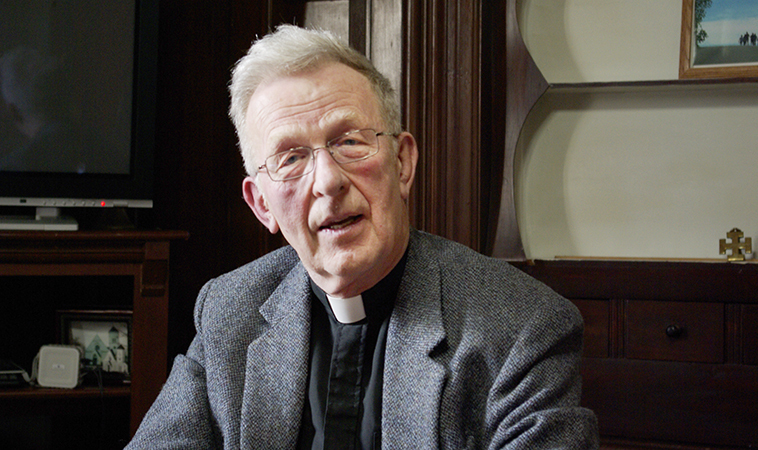 Editor’s note: This is the introduction to a series on rural parish ministry in the diocese that will run in the NB Anglican beginning in June.
There are two common beliefs held by some that this series on rural parishes will challenge: that rural parishes are one step away from dying, and that mission work is predominately done in cities and towns.
The New Brunswick Anglican visited with the Rev. Dr. David Mercer, priest-in-charge in the Parish of Prince William, Dumfries, Queensbury & Southampton, just up river from Fredericton. He has some definite ideas on and experiences with rural parishes.


“Most rural parishes are discouraged,” he said. “But the Christian faith is about hope. If we can’t give our parishes hope, they’ll go elsewhere to find it.”

Tenacity, though, is often what keeps rural parishes going.

“Rural people — the reason they’re surviving is they dig in their heels. Their biggest fear is their church will close.”

David said listening to CBC back in the 1980s, a professor talked about the three fixtures vital to rural communities: store, school and church.

“If you take those away, the community will die,” he said. “It resonated.”

His parish has three points — All Saints, Magaguadavic; St Luke, Temperance Vale; and St. Clement, Dumfries. In Dumfries, St. Clement’s is a newer church and rectory, brought about by what some would call an act of God. They were trying to decide whether or not to build a new church building. Then one morning, they found their building full of water. The decision was made. They rebuilt.

In winter, the parish closes the older two churches and they all gather at St. Clement’s where they remain until after Easter.

Then from May 1 until Nov. 1, they rotate hosting the service each week, with lunch afterwards, which seems to work.

“The biggest fear when St. Clement’s was built was that the other two would close, but it hasn’t happened,” he said, adding that drivers offer rides to those who need them so that everyone can get to church, no matter how far they live from the Sunday service. They average 50 a service.

“They’re a community,” he said. “Not three separate entities.”

At 74, he’s served in several parishes, but he’s never had a stewardship campaign.

“I always said if you can look God in the face when you put your envelope in the plate, you’ll not have a problem with me,” he said.

His parish goes about its missions in a quiet way. They give to people in need in the community without fanfare. They gave to the Canadian Red Cross after the ice storms in northern New Brunswick two years ago and after the wildfires in Alberta. St. Clement’s holds a Thanksgiving feast for the community, and in Magaguadavic, there are monthly community breakfasts each summer — by donation only.

David advocates home visits as a way to keep the connection strong between parishes and families.

“Even a handful of people should be ministered to, and it’s amazing what a handful can do,” he said. “You have to love people, encourage people, support people. People will do wonderful things when they’re encouraged.”

David is part-time in the parish, offering a Sunday service, weddings and funerals — “those kinds of things,” he says, for which he takes no money. He also teaches part-time at the University of New Brunswick’s philosophy department.

David has been in the parish since 2015, and he has no plans to change that.

“It’s a family,” he said. “It’s great. The bishop has given me an opportunity to have fun!”

Judy Ingraham about 2 years ago

Yes, I'm in full agreement with Fr. David's statement on a rural parish. I've been involved with the parish some 45 years and yes, we are a loving "parish" family (not just individual churches) who have shared so much including our weekly luncheon after Sunday service (since 1973) as well other outreach, covering a territory from Millville to Magaguadavic and both sides of the St. John from Mactaquac to Nackawic. If someone is missing from Sunday service, they are truly missed. Fr. David and Marlene are a true blessing to our parish and so dedicated throughout the whole year, building on the lasting legacy of Fr. Elmer Smith and Fr. Bob Barry. We're truly blessed as a Parish Family!