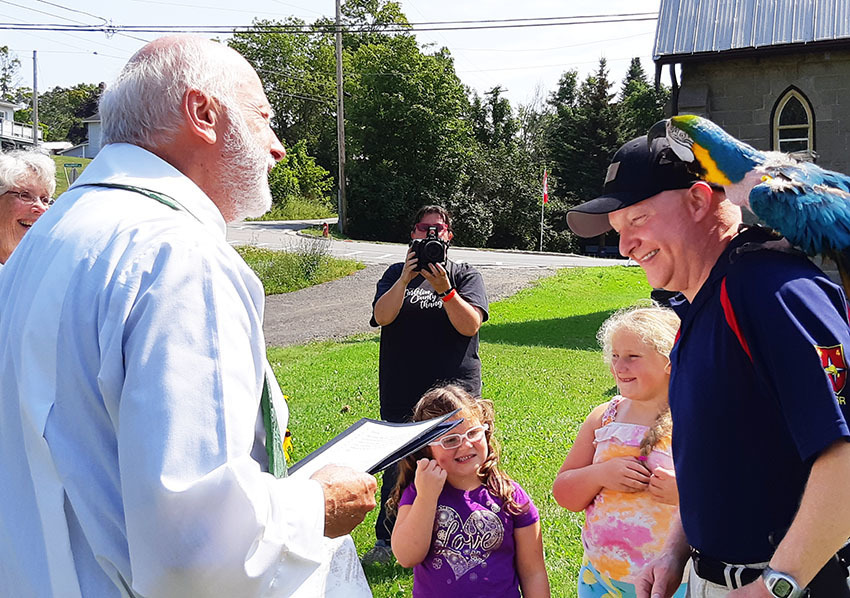 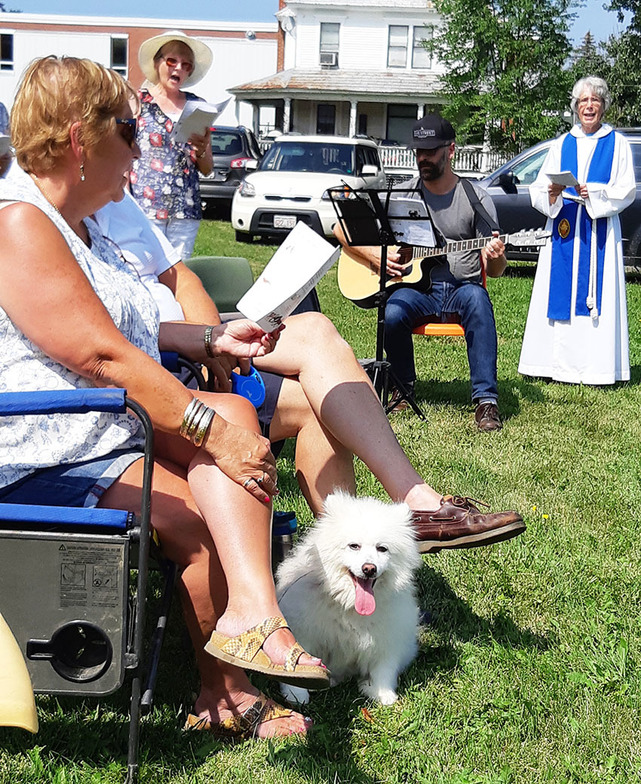 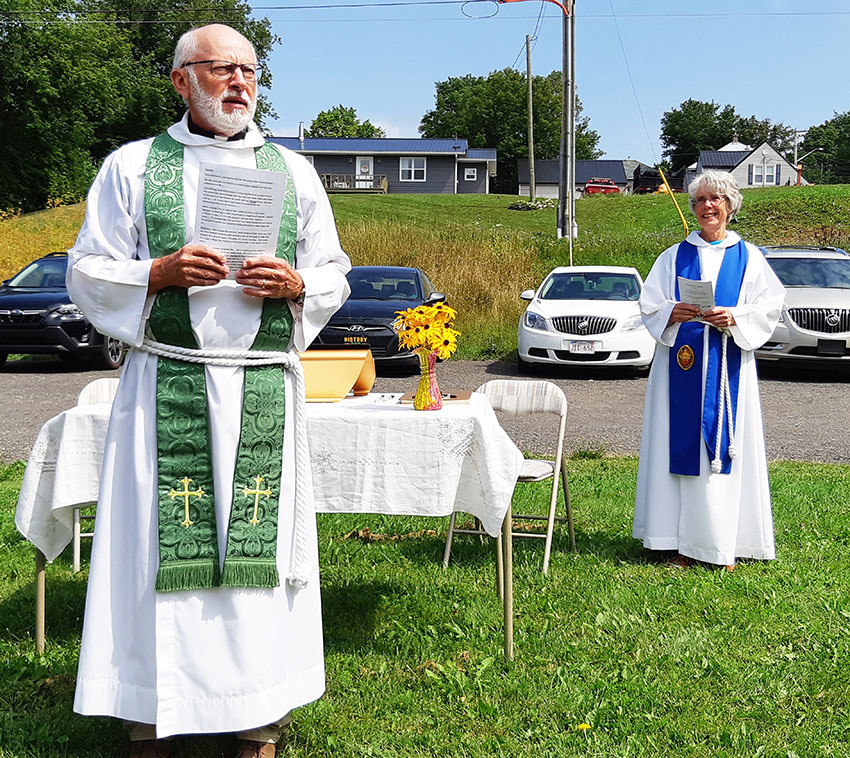 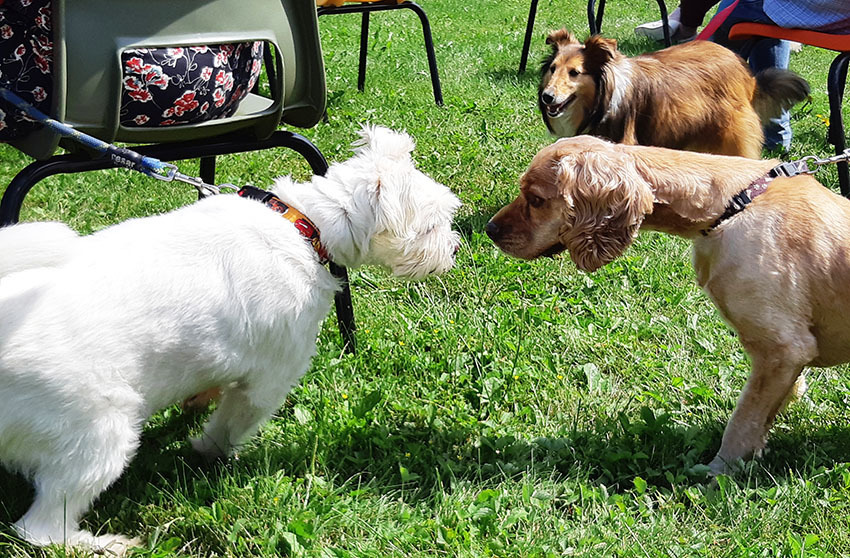 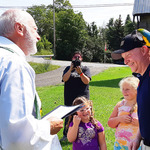 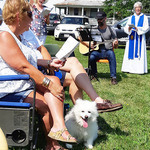 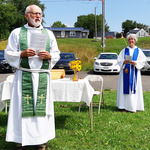 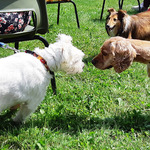 Eight dogs and a parrot “with an attitude” were in attendance at the Blessing of the Animals service at Holy Trinity in the Parish of Richmond Aug. 22.

The Rev. Rick Robinson presided over the service in Hartland, which organizers say was the first ever for the church. A few barks, whines and parrot squawks were heard throughout the service, but most animals were quiet and well-behaved.

In the church basement, the parish built an exhibit of paintings, carving and needlework — all animal themed — highlighting local talents, including parish members. Lemonade, water, cookies and dog treats were available to refresh all creatures on the hot, sunny day.

The outdoor service saw about 40 people join in the readings and singing. Guitarist Jeremiah Miller led the music.

This sort of service is usually held on or near the feast day of St. Francis of Assisi, the patron saint of animals. He followed the example of God, showing kindness, mercy, compassion, and love for all creation and God’s creatures.

Rick explained the purpose of the service. He was assisted by layreader Cindy Derksen. The parish accepted donations for animal care in the region.

“See that jar over there on the table?” asked Rick. “That money’s not going to me. It’s for the Carleton County Animal Shelter in Debec.”

Readings were from Genesis 1 and Matthew 6. During a version of Psalm 148, all manner of animals were mentioned:  dogs, cats, rabbits, hamsters, goldfish, guppies, swimming creatures, robins, wrens, singing birds, raccoons, squirrels, deer, horses, cows, sheep, lizards, snakes and creeping things — “every animal in the sky, the sea and the forest.”

Rick prayed for animal shelters and the work of service animals. He had each person bring their pet to the front as he blessed each one. Each pet received a certificate of blessing signed by Rick.

Others brought photos and the ashes of their beloved dogs and cats, which Rick acknowledged, thanking God for the companionship and life of each one.

During what he called “one of the shortest meditations of any clergy person that’s ever spoken,” he mentioned the parrot that was present.

“I’m told the parrot, Kato, may tell me to shut up. I’ve seen that in the eyes of parishioners before!”

He also told the story of visiting a sometime-church goer in the Bathurst area.

“She had a large parrot. Throughout the visit, the parrot said, several times, ‘time to go!’ I heard it with great clarity. So we left!”

The service was organized by Rick; his wife, Nancy; Ernest Clarke; and Ken Tompkins. Rick is filling in at the Parish of Richmond while they search for a priest.

“It seemed to be well received, not just by parishioners but by other people from the community as well,” said Ernest.

All three churches in the parish were well represented. Organizers were thrilled with the turnout, and were glad to have held it while the weather was still warm.

“Folks were still smiling and commenting on the service after Sunday morning worship,” said Nancy.

Donations of $350 were raised for animal shelters, with the local Debec shelter receiving the bulk of the funds.

“Although it takes quite a bit of effort to organize, I would recommend it as a project that other churches might consider as a natural way to open the church to the community,” said Ernest.

The 'Creatures Great and Small' art show was a popular stop, with visitors enjoying examples of painting, carving, needlework and stained glass.

“I want to thank all the artists and those who loaned art,” said Ernest.

Those who loaned art:  Nancy and Rick Robinson, Blaine Tompkins and Marilyn Wilson.

Pets in attendance:
Kato the parrot, with Ken Tompkins
Buddy, approximately 8, a yellow rescue dog, with Kim Smith
Dinah, 9, a Shetland sheepdog, with Ronda and Robert Foster
Callie, 4, a large black and white dog sporting a bandana, with Scott Goodine and Bonnie Sparks
Daisy, a Yorkshire terrier, and Bauer, a Maltese mix, with Chris Green and his mom, Shirley Green
Buddy, a golden cocker spaniel, with Lisa Cummings
Teddy bear, a black shepherd, with Blaine Tompkins
Betty, a Pomeranian, with Andy and Louise Bell

PHOTO CAPTIONS:
1.  The Rev. Rick Robinson gives Kato the parrot a blessing, as she sits on the shoulder of Ken Tompkins. In the background are Ken’s granddaughters, Madison and Brooke.  Layreader Cindy Derksen is seen at extreme left. The Blessing of the Animals service took place at Holy Trinity, Hartland, in the Parish of Richmond on Aug. 21.
2.  In the background, Nancy Robinson, Jeremiah Miller and Cindy Derksen lead the singing, while Betty, a Pomeranian, sits with her mom, Louise Bell.
3. The Rev. Rick Robinson leads the service, with assistance from layreader Cindy Derksen.
4. Bauer, a Maltese mix, and Buddy, a cocker spaniel, greet each other at the service, while Dinah
the Sheltie looks on.
McKnight photos

It was a great service, a preface to the Season of Creation. As well as blessing the relationship of humans and their living pets, there were half a dozen pets present in the form of ashes. There were also blessings for a digital horse and a couple of once-stray cats. The presence of four(!) reporters completed the menagerie.

We are in the Season of Creation Sept - Oct 4. This was a beautiful & meaningful way to express our thanks to God for the comfort , companionship & love that pets bring to us. blessings & thanks.. Cindy

Thank you for this lovely service, Callie was truly blessed as were we, as her humans. Callie is a rescue dog, her life went from being on the streets to being in a home where she is loved. If she could talk, I think she would have given thanks, (maybe that was in the tail wags) but, I know we give thanks for our Callie. Reminds me of God's charge of mankind to care for his Creation, sometimes we get it right....we have so much more to do......