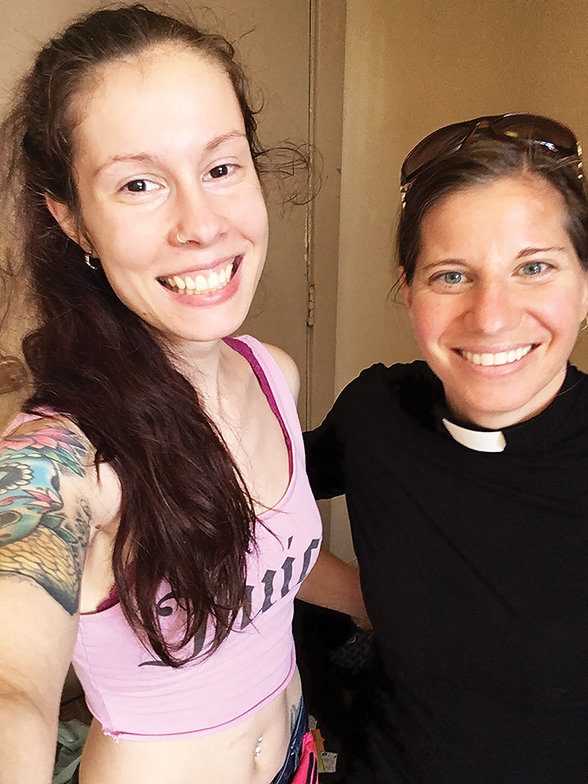 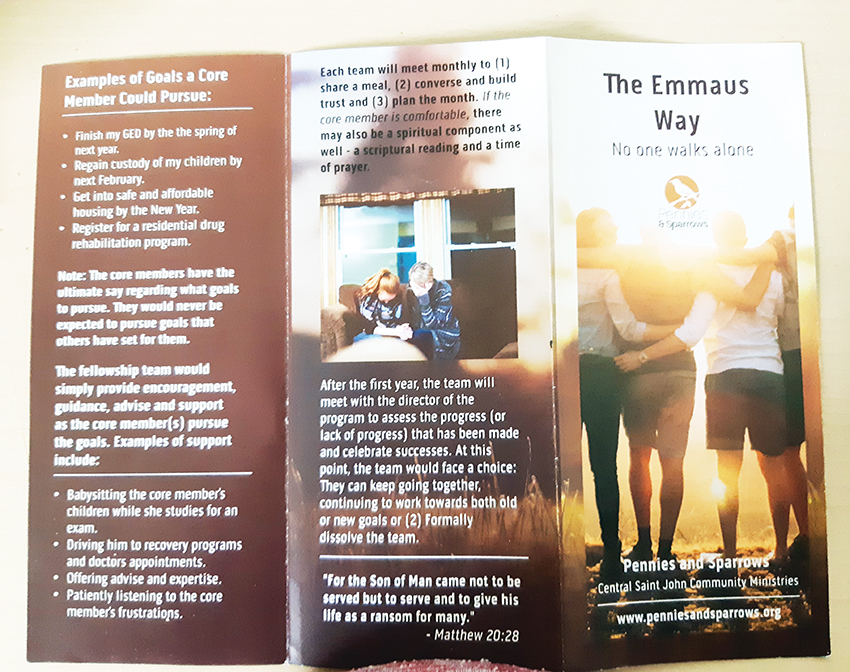 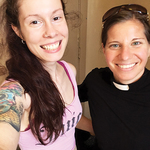 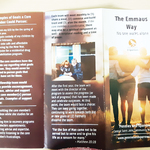 For most of us, when a crisis occurs, we have family, friends and a church family to rely on. People surround us with love, casseroles and prayers, and in our crisis, we feel well cared for.

Not everyone is so fortunate.

“There are a lot of people in the community who don’t have that support,” said the Rev. Jasmine Chandra. “We try to create that for them.”

One of their many projects is The Emmaus Way, a support system for people who need a shoulder to lean on.

Several years ago, Jasmine was trying to be that support system for a few single mothers in the city — offering drives to appointments, answering questions, finding resources. But it was tiring and overwhelming.

At the same time, Terence was part of a team helping a Syrian refugee family settle in the city. When he looked at this alongside his wife’s efforts, he saw big differences.

The name of the program references a story from Luke’s gospel shortly after the crucifixion of Jesus. Two disciples, stricken with grief, walk the road from Jerusalem to nearby Emmaus. They are joined by a stranger whom they don’t realize is Jesus. The lesson is they are not alone on that journey.

“There are a lot of people out there facing major crises alone,” said Terence. “For various reasons, they don’t have a natural circle of friends and family members to support them through their illness, mental health struggles, addictions and abuse.

“Consequently, many of them remain mired in their problems for a very long time — often for life.”

HOW IT WORKS
The Emmaus Way has had eight teams since its inception four years ago. Each team of a few people devotes time, energy and emotion to a person who needs a support system. Some are single moms, others struggle with addictions, homelessness, health issues and poverty.

Team members don’t have to be Anglican. Several are from other churches in the area. The commitment is at least one year — from both the person and the team members.

After volunteers are trained, the team of six to eight and the person meet to go over the expectations: mutual respect, monthly meetings and so on. At each subsequent meeting, they share the highs and lows of their lives — yes, all team members — to foster a sense of belonging.

If the person is willing, the group will do a short bible reflection. They eat together and then they map out the schedule of appointments and other commitments.

“We try to break up the month,” said Jasmine. “People are on for a week — to prevent burnout.”

Drives to appointments and shopping, phone calls, walks, coffee time, even a drive in the country are all part of the program, depending on the person’s needs and the team’s abilities. Team members who don’t drive act as advocates, make phone calls, do walks and coffee time.

“We encourage friendship and support — things you would do with a friend,” said Jasmine.

During COVID-19, one group decided to bubble with each other to keep meeting in person.

THE SUPPORTED PERSON
Not only does the person have to commit to a year, they also have to want a team of people in their
life. They are also encouraged to set goals for the year, for example, earning a GED diploma.

"Being able to think of goals is a luxury for some,” said Jasmine.

One single mom was able, at the end of the year, to repair her relationship with her father, who lives in British Columbia, and to move there to be closer to him. What does she miss? The support she had here.

One team ended when their person with a chronic disease was admitted to a nursing home. Some have ended because the person was no longer in crisis.

“It’s kind of like living at your parents’ house,” said Jasmine. “At some point you want to be on your own. I think things naturally come to an end.”

FOUR CASES
Case 1 is a single mom who met her team when her child was a newborn. What she values most is not the rides to appointments, though they are very helpful, but the encouragement and support she gets as a new mother.

“She was always a person of faith, and this has really brought that forward for her,” said Jasmine. “She wants her son to know God. I call that a desirable outcome.”

Case 2 is a recovering alcoholic who attends church uptown. Some of his team are also from that church, which has been a huge help to him. He’s had one relapse since his team formed around him.

This time, though, instead of binging for days, he called them on day two asking for an immediate ride to rehab.

“He has actually stopped me on the street to tell me how much the team means to him,” said Jasmine, adding his team has taken him hunting and hiking to get out of the city.

This man has had a friendship with Terence for years, but always refused to join the program. After ending up in the hospital, he relented.

Case 3 is a man the Chandras met through Stone Church’s laundry ministry. He was living under a bridge, struggling with an addiction to gambling. He called on Terence for help.

“The main goal was housing, so they formed a team of support around him,” said Jasmine. “He’s had setbacks, but he’s been housed since last January.”

The message that he’s valued and cared for is slowing sinking in, said Jasmine. He is looking more to his future than ever before.

Case 4 is unusual in that it is a refugee family in the city. The team has applied the principles of Emmaus Way to the family and it’s been working well. Their role includes a lot of appointments and translation.

EXPANSION
Obviously, the number of people the group can help is limited by the availability of volunteers. They’d like to have more so the program can expand.

Right now, their team members range in age from late 20s to 70s. Some are from Stone Church and some have been on more than one team. One team member moved from the U.S. and wanted to get involved in her new city.

“The biggest challenge is finding the volunteers to a certain degree,” said Jasmine. “They need to be people who aren’t trying to fix this person. They have to be passionate about caring for others.”

“The biggest piece of this is emotional support,” she said.

Safe Church education, a criminal record check and confidentiality are all factors in the process, as is the program training.

“We’d like to see this grow and expand,” said Jasmine. “This has worked. We’ve seen the changes. We see the layers of stress get peeled away.”

Jasmine calls it a de-professionalized approach to support, where the group — supported person and team — become a pseudo family.

“We’ve had some real successes and some real low points,” said Jasmine. “It’s not always an easy ministry for volunteers, and it’s not necessarily quick, but that’s not how Jesus would have us care.

“The amazing part is this crosses denominational lines,” said Jasmine. “We are all working towards the same goal. Overall, I feel the teams and individuals have done so well.”

If you are in the Saint John region and would like to talk about volunteering, or if your parish is interested in replicating The Emmaus Way, contact Jasmine:  jasminechandra@gmail.com .

Richard Larder, long-time volunteer with the disabled and other groups in Saint John, and a member of Stone Church, speaks about his experience with the Emmaus Way.

Why did you volunteer?
Terence and Jasmine Chandra have been wonderful gifts to the spirit and faith life of Saint John and especially our church.

Their involvements in the community enrich the lives of so many in need.

I was anxious in these trying times to help in some small way to make life for others more meaningful which has a wonderful personal spin-off.

As a result, I have been involved as a member of the Emmaus Way Oversight Committee and also a support member on two of their direct action committees under the Emmaus Way banner.

What has kept you involved?
I have a desire to be part of a group or groups that help and assist others who are in need in a practical fashion. I meet wonderful people, make new friends and enjoy being supportive of them in their life challenges.

What highlights would you like to share?
Just being there to help people in need is a blessing unto itself. In the end, the highlights are really related to the friends made and the goals accomplished which helps others get on with a more meaningful and fulfilling life.

Would you recommend this volunteer activity to others?
Hands down, YES! To borrow one of my favourite sayings from the late actress Eleanor Powell: “What we are is God’s gift to us. What we become is our gift to God.”

Her words have inspired me to do more for others in faith and action. I feel that my life has meaningful purpose as a result of such involvements.

I would like to applaud the mission of Jasmine and Terence Chandra’s work via Emmaus Way. They are committed to a faith-filled transformation of the lives of people and families in need for the better by personal, informal supports from a Christian base.

The personal supports of ordinary people helping others makes a newer world of people not just focussing on “I” but more on a “we” world where we all are faithfully and practically together in a common purpose and cause.

PHOTO CAPTIONS:
1.  The Rev. Jasmine Chandra, right, with an unidentified woman who was in need of support from the Emmaus Way mission. She has since forged a stable life and no longer needs the group.