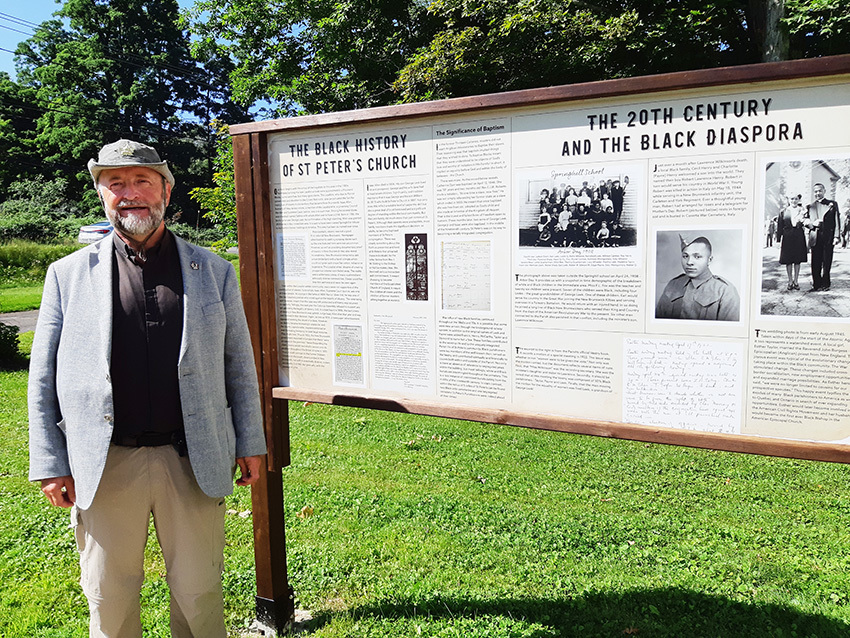 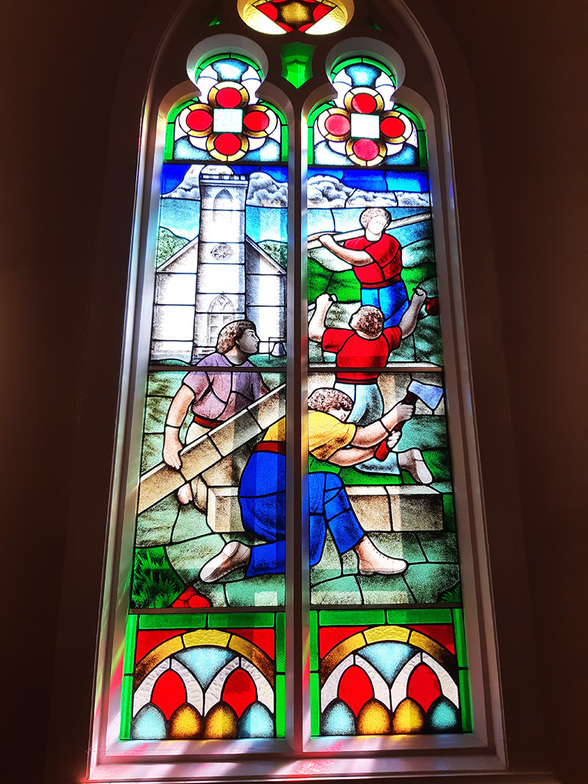 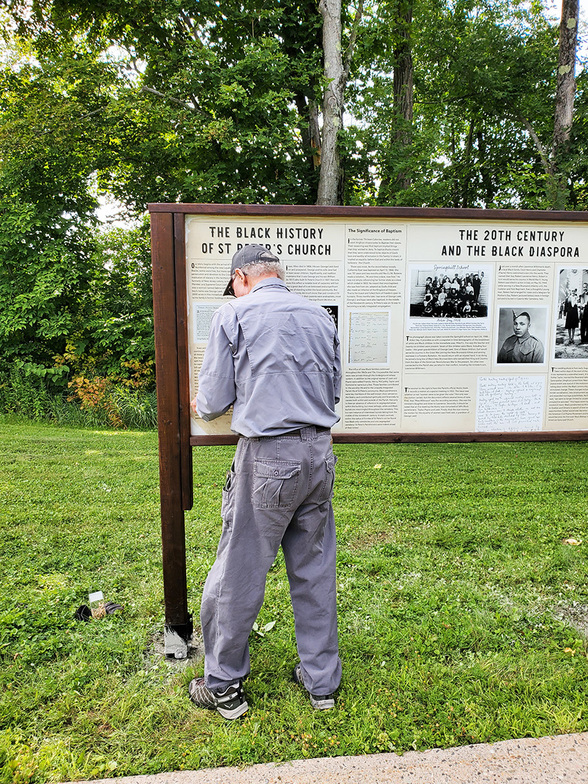 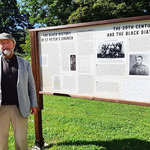 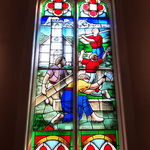 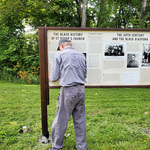 When you are surrounded by history and your education is focused on history, what do you do? You share it.

The Rev. Canon Dr. Ross Hebb has been sharing history in the form of books for several years, but this past summer, he unveiled something more user-friendly and accessible: a large information board at the entrance to St. Peter’s Anglican Church, Fredericton, where he is the rector.

Ross calls it a billboard, rather apt since, at its conception, it was only the size of a poster. The vast amount of information demanded the larger size, and now everyone can read about a fascinating and compelling aspect of St. Peters’ past: its Black history. It is entitled The Black History of St. Peter's Church.

When the historian and priest arrived in the parish 25 years ago, he was thrilled to find an abundance of history just waiting to be discovered.

“It takes time to dig it up,” he said. “It wasn’t really known when I came here.”

Binders, files, boxes and books are all part of his years of research. And earlier this year, he came up with a plan to condense it and share it on the billboard.

“St. Peter’s literally provides the framework through which the Black history of the area is told. I had all this information in my mind, so I thought about doing something of an exhibit outside,” he said.

The billboard’s first section is on the slave era, since many Black people — slaves, former slaves, indentured servants — arrived with Loyalists in what is now New Brunswick in the 1780s.

The rest illustrates the growth of the Black community in Springhill, just upriver from Fredericton’s early boundaries, and the growth of St. Peter’s as a worshipping community with a significant Black population.

CHURCH HISTORY
After the establishment of the Loyalists in Fredericton and the growth of the community, daughter parishes were established nearby, one being St. Peter’s.

It could be that the most significant decision in the parish’s history was one of its first:  the hiring of George Leek and his son, William, to build its church.

It was 1837, and contracting a Black carpenter was a bold step.

“A great deal of trust was placed in them,” said Ross.

The church was successfully built, and over the years, many Black families found their community at St. Peter’s. They were baptized, married and buried at St. Peter’s.

“They comprised at least one-quarter of the congregation and they were fully involved in everything.
“There were no segregated pews. They were on vestry, and in the choir from very early on. Choir was a big deal here,” said Ross.

To illustrate their impact, the billboard has a record of the vestry minutes of 1922, in which a motion to give women the right to vote and participate in church business, was made by a Black man. It passed.

“April 24, 1922, moved by Fred Leek, seconded by Chas. Murray: ‘Lady members of the congregation have equal voice with the men at all parochial meetings.’”

George Leek, builder of St. Peter’s, had left another legacy — the mover of that motion was his grandson. The billboard also notes that three of the six vestry members were Black.

Dr. Mary Louise McCarthy is part of the George Leek legacy. She has three sets of grandparents buried in the St. Peter’s cemetery, maybe even a fourth, according to Ross’s ongoing research.

She often visits the grave of her beloved grandmother, Martha Beatrice Leek McCarthy at St. Peter’s. Mary’s maternal line is the Dymonds of Springhill, who were also parishioners. Truly, St. Peter’s is her family’s spiritual home.

“I feel very, very proud of my family legacy,” she said. “I tell my nieces and nephews, you have such strong DNA in your body. You can’t get me to stop talking about my genealogy!”

Mary earned a PhD from the University of Toronto last year. Her dissertation delved into early Black communities of New Brunswick, with an emphasis on segregated graveyards. (See the February 2021 edition of the New Brunswick Anglican to read Mary’s story.)

FORGIVENESS
How was it that, in an era when the governing race of Whites was well-known for its despicable treatment of Blacks, St. Peter’s was the exception?

“St. Peter’s was an island of equality amidst a much more hostile society,” said Ross. “And it was because of the application of baptismal theology.”

Here is his explanation: In the Thirteen Colonies, missionaries wanted to baptize Black slaves, but their masters wouldn’t allow it. Why? Because to baptize them would mean they were equal members of God’s family, part of the body of Christ, and worthy of his love — uncomfortable truth for men who owned people.

When baptisms of Black members took place at St. Peter’s a century later, “it was proof that there was a general understanding of equality.

“The story of Blacks at St. Peter’s is a story of people who chose to join a community,” said Ross.
“They didn’t go off and build a Black church. They joined the established Church of England. They made that choice because they wanted to be part of a broader community.”

What the early Black community of St. Peter’s understood is something we often forget, said Ross.

“The Christian religion is about forgiveness. The traditional ‘big deal’ about baptism is forgiveness.”

Ross believes that forgiving the perpetrators of slavery is what allowed them to sit in the pews of a Church of England building — not figuratively, but emotionally. Otherwise, how could they be part of the institution?

It was not as if there was a ceremony to officially mark that forgiveness, and there were no reparations for the wrongs done.

“In the 19th century, there was no overt public admission of guilt, but for Black and White to go to the communion rail side-by-side — well, actions speak. It was all substance, not symbolism.”

Ross sees a lesson in the generous, forgiving nature he believes was foundational at St. Peter’s.

“It’s a model of the way forward,” he said. “It was ahead of its time and it speaks to the issues of our day — Black and White together, persisting together.

Photo captions:
1. The Rev. Canon Dr. Ross Hebb at St. Peter’s, Fredericton with the billboard he designed to illustrate the Black history of the parish.
2. In 1978, sisters Gladys Lupton and Esther Burgess had this stained glass, depicting the church’s construction, installed at St. Peter’s, another testament to the inclusive beginnings of the parish. Their ancestors, George and William Leek, were hired as the carpenters in 1837.
3. Bob Matthews helps install the billboard earlier this summer in the forecourt of St. Peter’s, Woodstock Road, Fredericton.
Photo credits: Gisele McKnight/submitted