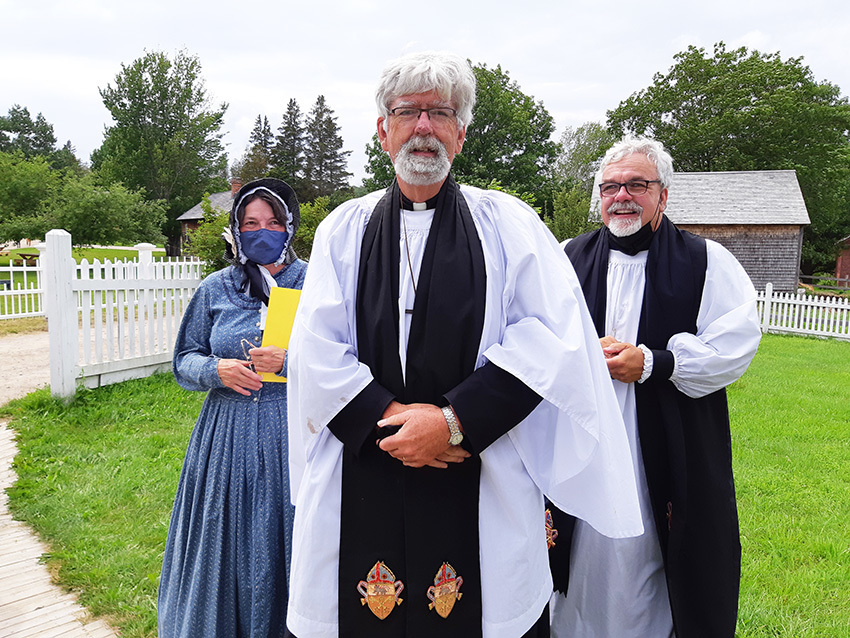 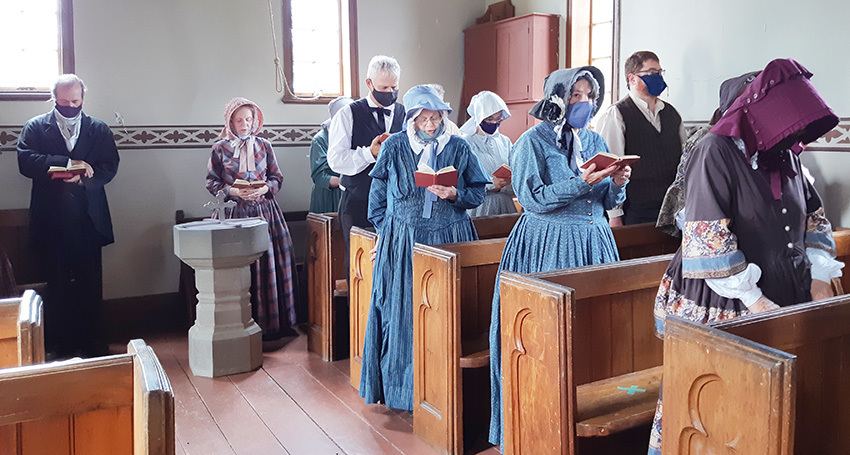 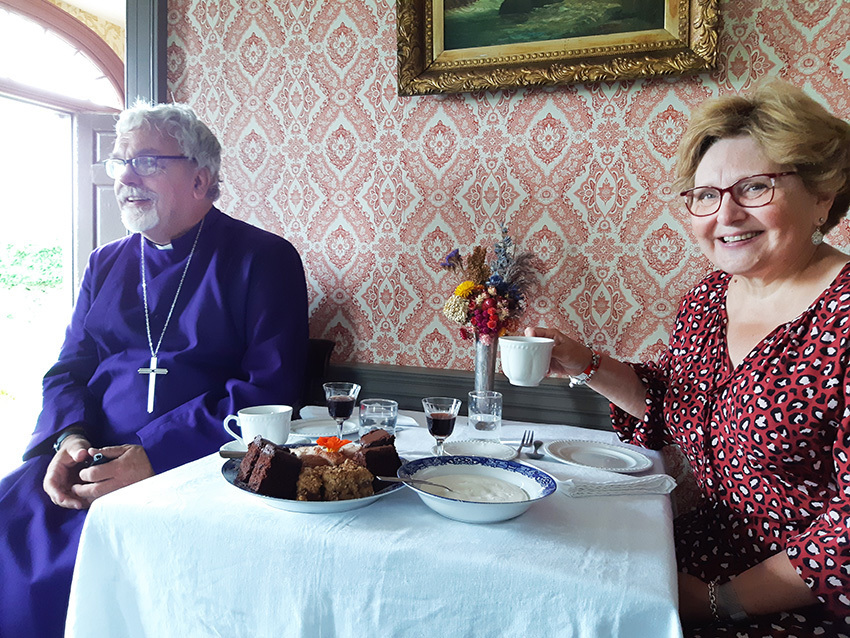 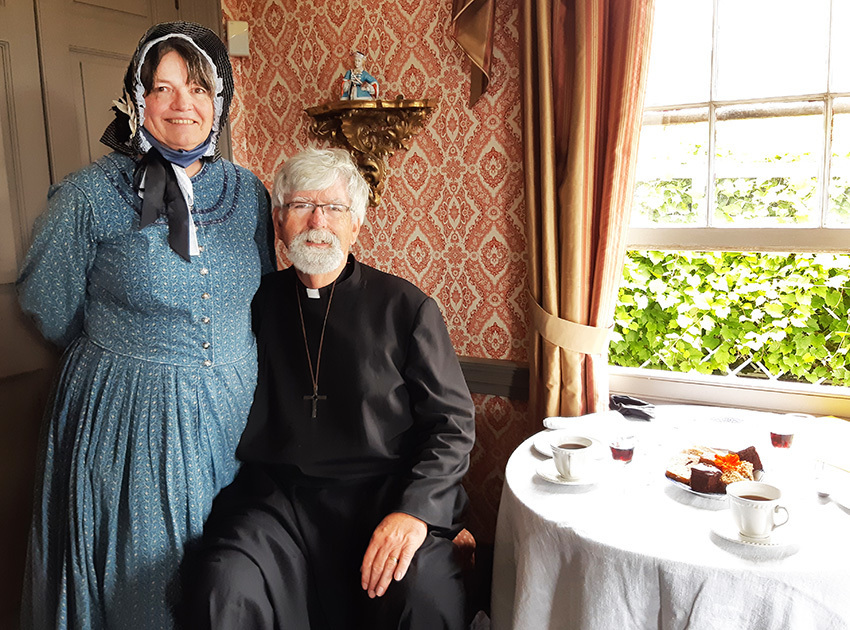 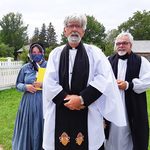 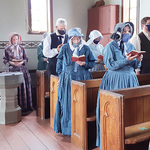 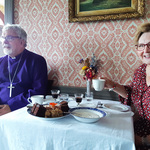 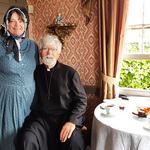 It’s been a long time since Kings Landing Historical Settlement had a vicar. That changed July 25 during a service to induct the Rev. Canon Walter Williams as the vicar of St. Mark’s Chapel of Ease. Archbishop David Edwards presided.

“Forty years ago when I was in [the Parish of] Zealand, Canon Ted Eaton was vicar,” said Walter. “He was on paid staff. He told me, ‘Someday maybe you’ll be vicar.’ I laughed.”

The arrival of CEO Mary Baruth to Kings Landing has brought about changes, and Walter’s new position is one of them. Earlier, Walter went to meet with Mary to do some planning for the summer services at the chapel.

“The next thing I know, I’ve got a licence from the bishop!” said Walter.

Not only did Mary want Walter to be the vicar, she wanted him and his wife, Lorna, to drop in during the week, in period costume.

“So we go more or less once a week and visit the various homes, talk to the staff and the visitors,” he said.

The first weekday he was onsite, there was a baseball game going on. He was told he was pitching an inning. “So I pitched an inning in my cassock,” he said.

Walter finds his new role similar to parish ministry, visiting homes, chatting and taking tea. And Mary has told the staff they are free to talk with Walter in confidence. He is their vicar.

Another big change is the Sunday service time. Now at 2 p.m., it allows visitors to more easily catch the last wagon back to the entrance, and staff have permission to attend, since they work every Sunday during the season.

On Rogation Sunday, Kings Landing held a church picnic after the service, using newly built, old-style picnic tables and enjoying treats made at the houses.

THE INDUCTION SERVICE
As the bell rang to call villagers to prayer, a staff member played Rock of Ages on the pump organ. Curious visitors wandered in and took a seat. For this special occasion, 20 staff members joined Walter as he led the congregation in Evening Prayer.

Archbishop David preached a homily, which began with a recollection of what he had been doing 24 hours earlier — sticking his feet in a neighbourhood wading pool with his wife, Debbie and grandson, Isaiah.

“It was his first sleepover with Nana and me,” he said, adding that Isaiah was there without his older sister, Grace — a big deal to a four-year-old.

Then David recounted a verse from Romans that Walter had read that mentioned Abba — not the band, he noted.

“It’s also the name of God,” he said. “During the sleepover, Isaiah didn’t cry, he didn’t demand to go home. He knew he was safe, protected and cared for,” said David.

You, too, can feel safe, protected and cared for when you call on Abba, he said.

“He loves and cares for us,” said David.

As David presented Walter with his licence, making his appointment as vicar official, the congregation broke into applause. Walter is already well-known to the staff.

On a sad note, David announced the death of Darrel Butler, a senior manager who worked at Kings Landing for 44 years, and member of Christ Church (Parish) Church, and prayed for Daryl and his family.

After the service, the group was invited to Ingraham House for fellowship and refreshments. Staff from several houses had prepared the fresh cream, chocolate cake, apple squares and other dainties, plus glasses of port for guests.

OTHER CHANGES
Mary is originally from Ontario and has many years of experience in the field of living history, including re-enactments.

She began as Kings Landing’s new CEO in January, 2020, just before the pandemic hit. She’s thrilled that Walter is the vicar and she sees the results in her staff.

“We have a lot of regular churchgoers, all different denominations, and they appreciate the opportunity [to attend church],” she said.

“The staff love seeing Walter on-site. It lends itself to a more authentic experience,” she said, adding that in any 19th century village, the vicar, his wife and the church would play a central role in the lives of the inhabitants.

Last December, they got a glimpse of what having a vicar would be like. Walter was able to lead a Lessons & Carols service during a public Christmas event. Mary played the violin, and other staff played instruments and did readings.

“It was packed,” said Mary.

Music will now play an integral role at the site, with her own violin playing, staff members learning an instrument from co-workers, and the creation of a staff choral group that sings for visitors.

2. About 20 staff members attended the induction service July 25. They are permitted to attend the weekly service, since they work every Sunday during the tourist season.

3.  Archbishop David Edwards and wife Debbie during the tea at Ingraham House after the induction service on July 25.

4. Lorna and Walter Williams at the Ingraham House tea following the service of induction on July 25.

Fredericton
St. Mark Chapel of Ease, Kings Landing
Comments for this post are now off.