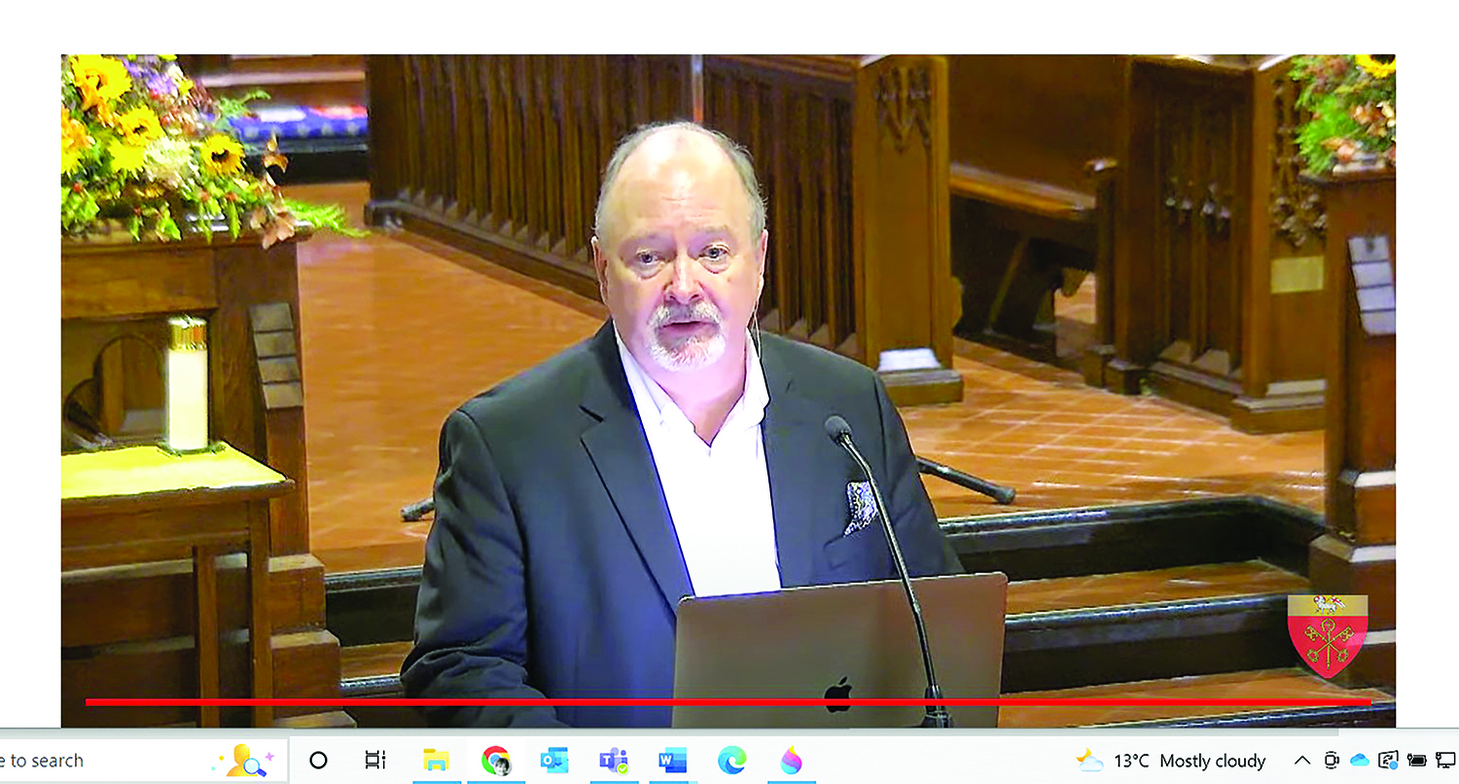 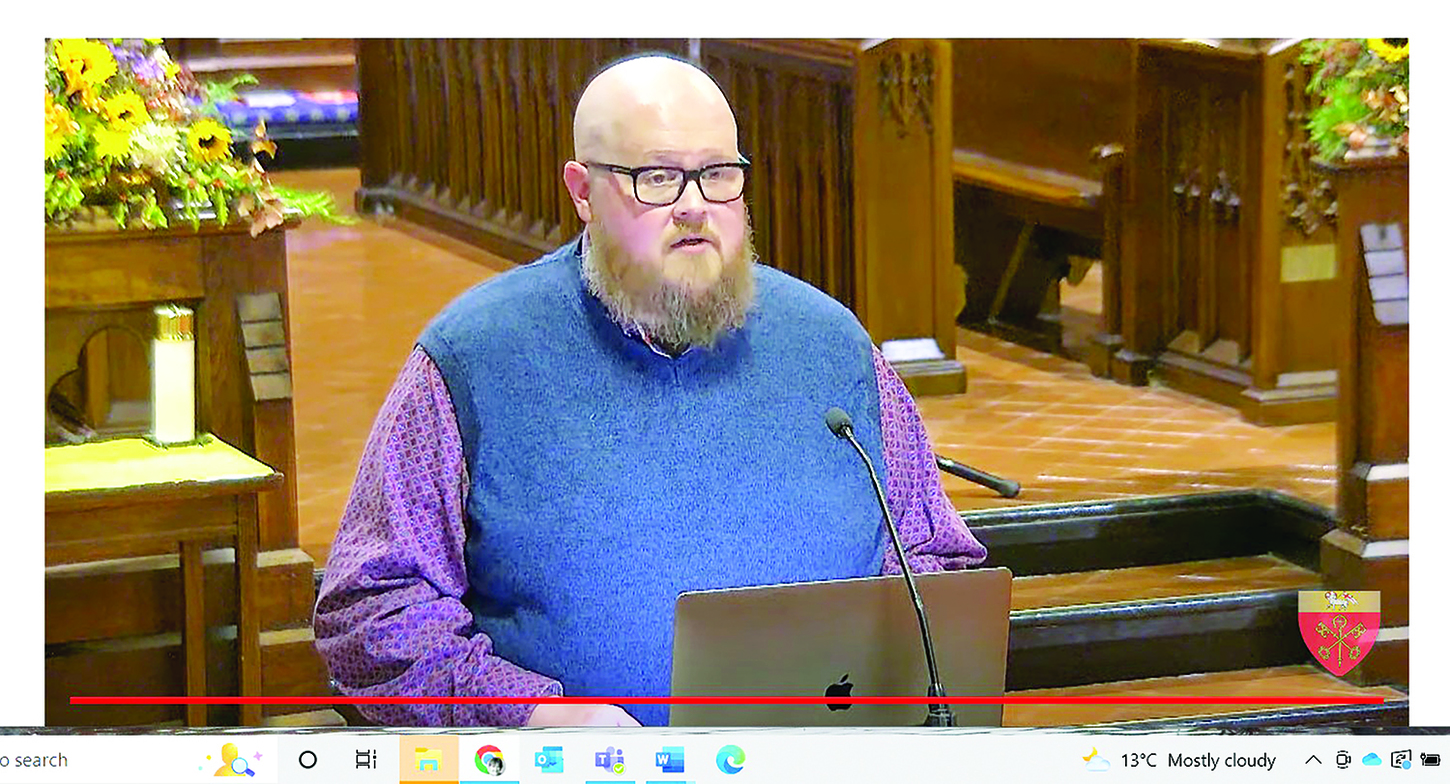 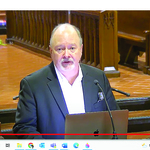 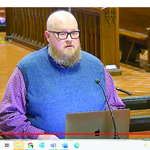 Dr. John Stackhouse, a professor of religious studies at Crandall University in Moncton, was the featured speaker of this fall’s Medley Lectures presentation on Oct. 12. John is also a member of St. George’s Anglican Church in Moncton.

The Medley Lectures, formerly known as the Christian Forum, are presented by the Mission & Outreach Committee of the Diocese. About 35 people met in person at Christ Church Cathedral, while more than 50, including two church congregations, joined via video link for his presentation called Thick Churches: The Answer to Christianity's Decline in Canada.

“To discouragement, I intent to add some disillusionment,” he said by way of introduction.

Indeed, his statistics were discouraging. The 1971 Canadian census “shows the high-water mark for Christianity in Canada,” he said.

“There’s also been a decline in cultural influence,” he said. “The media is no longer interested in what the church has to say.”

In 1971, 95 per cent of Canadians called themselves Christians. That number has shrunk to around 66 per cent, and Stackhouse predicted the 2021 census will likely put it at 60 per cent.

Two tiny hopes in all this are Roman Catholic growth among immigrants, and the ability of the Evangelicals (Baptist, Salvation Army, Nazarene, Wesleyan, Pentecost, Mennonites) to hang on to their numbers.

“Their success is almost entirely from retaining their youth, and immigrants from China and especially South Korea,” said John, adding Evangelicals invest heavily in summer camps and youth pastors.

NON-CHRISTIANS
The non-Christian religious population accounts for about 10 per cent of people in Canada, but John believes their impact and numbers are skewed by over-reporting in large cities. He also questions whether the children and grandchildren of immigrants will keep their religion.

“If you feel we’re being overrun by Islam, you can calm right down,” he said.

NON-RELIGIOUS
People who claim no religion now make up one-quarter of Canada’s population, with very few calling themselves atheists or agnostics. While some are angry ex-Christians, most don’t have anything against Christianity, they simply don’t know much about it.

“I see them at Crandall,” he said.

Within the population, some scholars propose there are four categories: the highly religious, the culturally religious (as in Quebec), the spiritual but not religious, and those with no religion.

The middle categories are taken up largely by the Baby Boomers and their children, said John. The highly religious are the most active on social issues.

While the 1950s might have seemed like a return to normalcy, there was no “normal” to return to, as the list above indicates. And by the 1960s, there was a lot of “acting out” — drugs, sex, plus anti-establishment, anti-war behaviour.

Since then, “there have been no major wars, no major depressions and nothing to impede this social experiment,” said John.

CANADA BEFORE 1840
The Canadian colonies, including New Brunswick, were largely unchurched before Confederation. With thin populations, there were very few churches, though that changed after 1840. The Loyalist influence grew, and the Roman Catholics were enjoying a revival.

“There was a remarkable enfoldment of the Canadian population into church,” said John. “By Confederation, almost all Canadians went to church. It’s quite amazing. Canada was one of the most Christian countries in the world.”

The 1850s to the 1950s was Canada’s Christian century, with great influence on society. But since the 1960s, Canada has been racing the Dutch to shed Christianity.

The statistics clearly illustrate the fall: in 1946, 60 per cent of the population was in church every week. Now, that percentage is 20.

“Does it feel different in church on Sunday? Oh yeah!” said John.

POSITIVE & NEGATIVE
A positive development is a focus on social justice, equality, compassion, diversity and freedom, which is rather a paradox considering our abandonment of the church, said John.

A negative development is that those same social justice issues are surrounded by a new orthodoxy — mandated beliefs, values and practices.

“When you have beliefs, values and practices, you’ve got a religion, baby!” said John. “Just try to have a different opinion on abortion, climate change, residential schools…”

This new orthodoxy is the way modern society is going, said John.

HOPE
“I think things really changed in one generation,” said John. “In the 1960s everyone was so much like us. Now we’re so much like everyone else.”

As the saying goes, Christianity is a mile wide and an inch deep, but what we need are thick, substantial churches that focus on these principles:

• Teaching that is substantial, broad and adequate for all of life’s challenges.
“Services now are mood elevators,” said John. “It lasts until we leave the parking lot and someone cuts us off.”

• Worship that is informative and transformative. “We need to spend time with God,” said John. “It should have ramifications for our lives and it should show.”

• Fellowship, that includes serious conversations, actual accountability, and uncomfortable questions. “It should include practical help… and sustained consolation… We should have fun together,” said John.

“I actually grew up in a church like this in Northern Ontario. They were friendly, even with people they didn’t particularly like — to preserve the unity.

• Investment of money and time on task. Imagination, attention and money are enough to make the necessary difference, “enough to make Jesus Lord of my life.”

Thick churches, with a much more substantial foundation, “are going to make an annoying difference,” said John. “Thick churches will displace our idols: our work, our sports, our hobbies.”

But to do this, there are some difficult choices ahead. One example is Sunday morning hockey practices, which keep kids and parents out of church for weeks.

“Jesus had some fairly interesting things to say about using family,” said John. “Ten per cent better won’t do it. Will we finally say no to everything that interferes with discipleship?

“We can’t resist on our own. We have to cluster together.”

After the presentation, John took several questions from the audience, where he made this statement in answer to a question:

“The problem with the Christian church in Canada is not that we’re persecuted to death. We’ll be lulled to death. It’s about comfort and security. We’re just slowly going to stop going.”