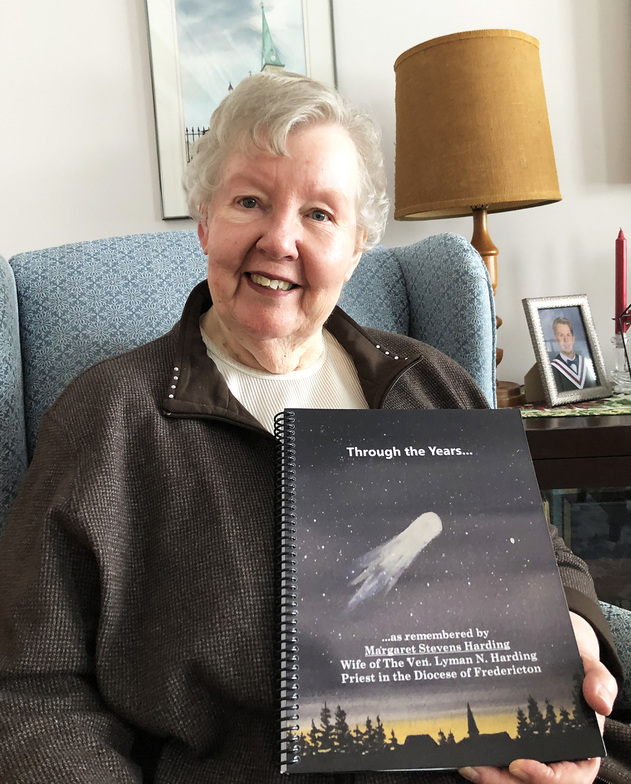 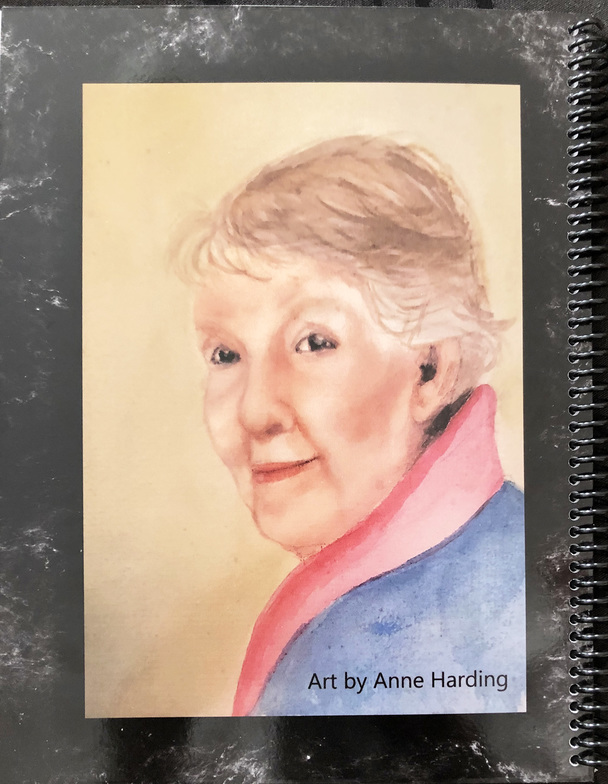 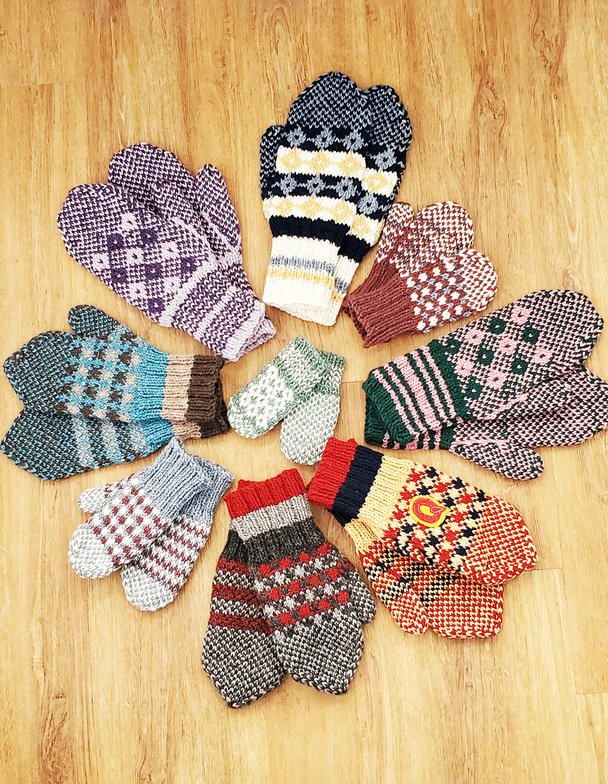 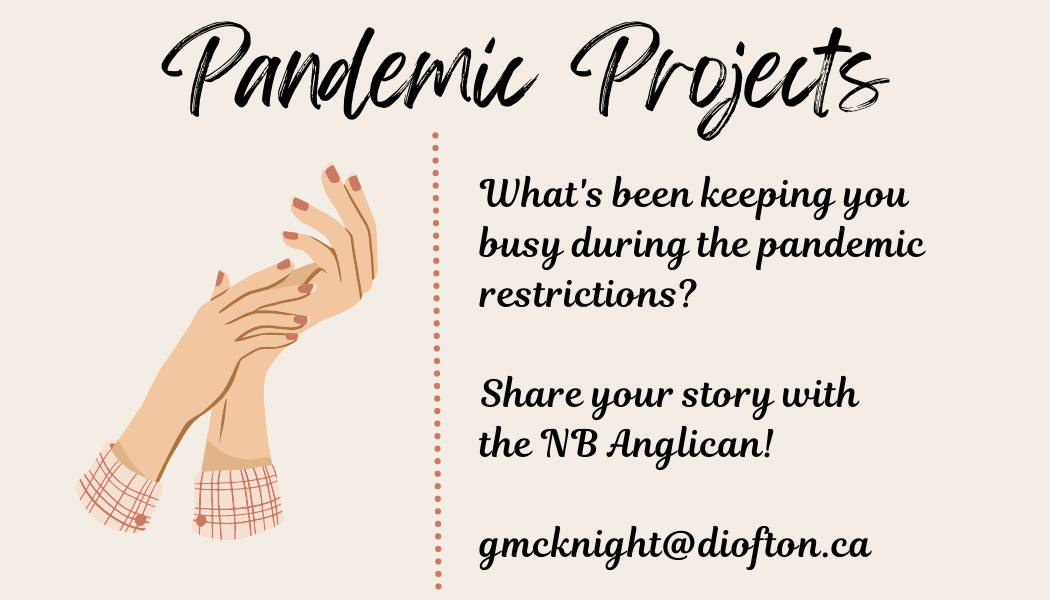 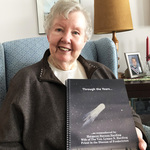 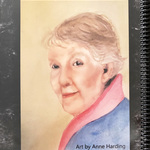 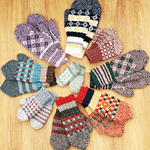 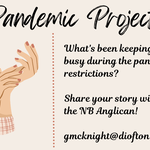 Clergy widow Margaret Harding, married to the Ven. Lyman Harding, has kept busy during the pandemic. She decided on two projects: knitting and writing her autobiography.

“I made enough mittens for my whole family and some of my friends,” said Margaret. “The pandemic has been good for me. I enjoyed it.”

What she enjoyed, to be precise, is the isolation. She was an only child, and as such, learned how to be on her own and entertain herself a long time ago.

Margaret, 81, lives in Peterborough, Ont. an hour away from two of her three daughters. The third lives in Newfoundland and Labrador. But her heart is still in New Brunswick, where she and Lyman lived for most of their married lives.

The idea of an autobiography came from Lyman, who noted that although there is plenty written on the diocese’s first bishop, John Medley, there is next to nothing on his wife. That planted a seed, and she began writing several years ago while on a cruise.

The pandemic was the perfect time to dust off that project.

“This was a great chance to get that done, when we were limited in what we could do, so I sat down pretty much every day and wrote,” said Margaret.

She covered her early years, young adulthood, the six parishes she and Lyman served in, and her retirement years.

“It’s the story of my life, written mostly for my family, but I put one in the archives as well,” she said.

The end product is a spiral bound book with a portrait of her on the back, courtesy of her daughter, Anne’s, artistic skills. She called it “Through The Years.”

“It was great fun because it brough back so many memories.”

Margaret’s book recounts how she met Lyman. It was at the bishop’s Canterbury Club Christmas party in 1960. Lyman, from Ontario, was a curate at Christ Church Cathedral and a university student.

They began dating after Christmas and soon realized they’d actually met earlier at a restaurant in St. Andrews where Margaret was working.

At the time, a group of clergy — all older, white-haired men, with one exception — was travelling to Grand Manan and stopped for a meal. Margaret remembered admiring the one exception, and Lyman remembered the blonde waitress.

After they began dating, “we knew fairly soon we were destined to be together.”

ZEALAND
The book highlights her memories of the six parishes, beginning with Zealand.

“I moved there when I was 23 years old,” she said. “This was our first home. I didn’t know anything about housekeeping or cooking. The ladies taught me so much. I’m very grateful for them.”

Zealand is where Margaret and Lyman welcomed two daughters. She also noted that their telephone was a crank model, with 20 people on the same line. Lyman opted for a private line after a short time, she said.

EDMUNDSTON
Lyman replaced Canon Franchetti in the Parish of Edmundston. Margaret fondly remembers both the canon and his housekeeper, Molly. The two went to Alberta to attend a wedding, but by the time they got there, it had been called off. Seizing the moment, Canon Franchetti asked Molly to marry him. They came for a wedding, and they got one, said Margaret.

The Hardings’ third daughter was born in Edmundston, and Margaret has many happy memories of fundraising for the church and the many recipes, arts and crafts she collected while living there.

ST. STEPHEN
Parish number three was Margaret’s home of St. Stephen. As a child, she remembered walking past the rectory, seeing a well-dressed little girl in the doorway, and thinking, ‘rich people live there.’ That rectory would become her home many years later.

Lyman was concerned her family connection might complicate matters, but it actually worked out well.

This was where Margaret resurrected her teaching career. She was given a remedial class of children who all had disabilities of some sort. She was unprepared for how difficult the work was.

“I was a clergy wife, a teacher in a demanding role and a mother,” she said. “I attribute [any success] to God’s strength.”

After the initial adjustment, she began to love her job, and taught for three years before they left St. Stephen.

WOODSTOCK
“We loved all our parishes and I always found the people very accepting,” she said, adding the women of Woodstock were especially so.

She taught at a school for children with special needs for six years.

“I loved working with those children,” she said. “It was a very rewarding period of my life. My co-workers, the parents — they were all channels that God worked through.”

KINGSTON
Margaret loved the history in the Parish of Kingston. They were there when the parish celebrated its 200th anniversary. Among the many dignitaries was a bishop from South America visiting the diocese who attended the anniversary.

On the day of the huge celebratory dinner, Margaret left work early, went to the grocery store, picked up the children, caught the ferry home and arrived a bit disheveled — just as people were gathering.

The warden helped her in with the groceries, and she flew upstairs to freshen up, then went to the dinner.  A few minutes later in the parish hall, a guest told her how lovely she looked.

‘You should have seen her 10 minutes ago!’ was the warden’s response.

TRINITY, SAINT JOHN
Moving to Saint John allowed her to keep her teaching job in Quispamsis, which was a blessing to Margaret.

She remembers a parish for which Loyalist history and music were highlights and the UK Yorkminster Choir came to perform. Trinity parishioners were invited to visit Yorkminster and a few years later, several, including Margaret and Lyman, made the trip.

It was at this time that Lyman and the (now) Rev. Canon Chris VanBuskirk began an organization focussed on the children of the city:  Inner City Youth Ministry, which continues that important work today.

RETIREMENT
It was in 1998 that both Margaret and Lyman retired and moved to St. Stephen. They were blessed to have their daughter and her husband also living there. Their only grandchildren, boy and girl twins, were born there and were eight years old when their father joined the RCMP and was posted to British Columbia.

In 2009, Margaret was seriously ill with a blood clot — so ill the doctors told her she might not live through the night. It was then that she asked Lyman, assuming God would bless her with more time, if he’d like to move back to Ontario, since two of their daughters lived in Toronto.

Lyman was thrilled, Margaret survived, and they chose a condo in Peterborough in which to settle. After Lyman’s death in 2017, Margaret moved to a retirement residence, which she loves. It’s the perfect place for her, she said.

In preparing her autobiography, Margaret recounted the many times God’s hand guided her, beginning in childhood. Her mother, she said, talked to her about Jesus and encouraged her to talk to him.

“All through the years, God has directed me to do certain things and make certain choices — ever since I was a little girl,” she said. “I’ve never known a time when I didn’t know Jesus was my friend.”

When pandemic rules did not allow her girls to visit, the family — Margaret, her three girls and two grandchildren — would connect over Zoom every week.

She hopes her pandemic project might inspire others to leave the gift of recorded memories to their families.

“God has been so good, and as a result, life has been good to me, and,” she said, adding Mother Theresa’s words have long guided her:  ‘We can’t all do great things, but we can all do little things with great love.’

PHOTO CAPTIONS:
1. Margaret Harding with her book of memoirs entitled 'Through The Years.'

2. The back cover of the book has a portrait of Margaret, created by her daugher, Anne.

Thanks for sharing your story. Women's stories are important to be heard.

Lovely story Margaret, we shared some great times at Trinity. I often think of you and Lyman
Marje Harrison

Thank you Margaret - and Gisele. Brenda and I were just thinking of you (Margaret) last night - serendipity OR God works in mysterious ways! - and our time in St Stephen - and St Peters, Milltown. I look forward to reading your autobiography. Jim

Keith and Shirley Fletcher 5 months ago

What a wonderful read. Thank you for sharing.
God Bless
Shirley