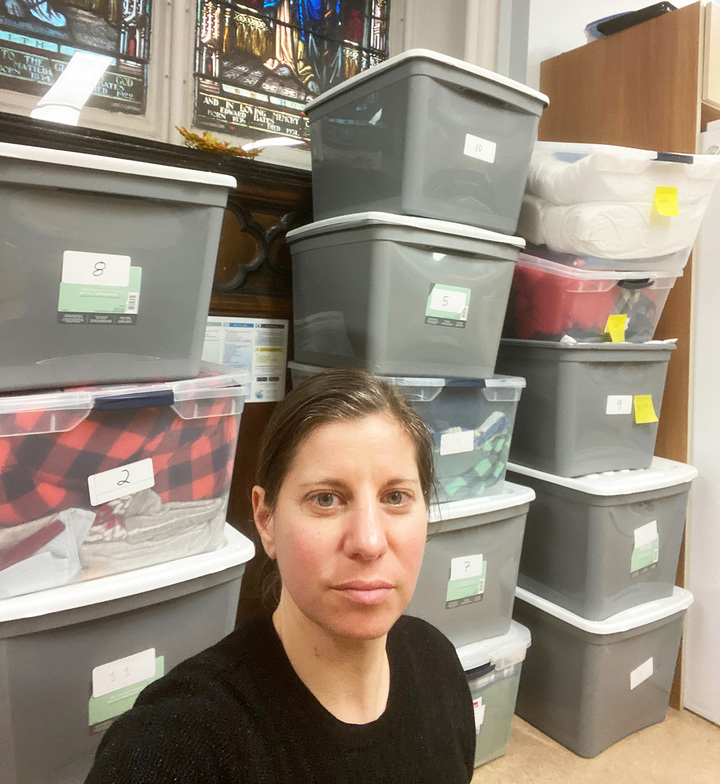 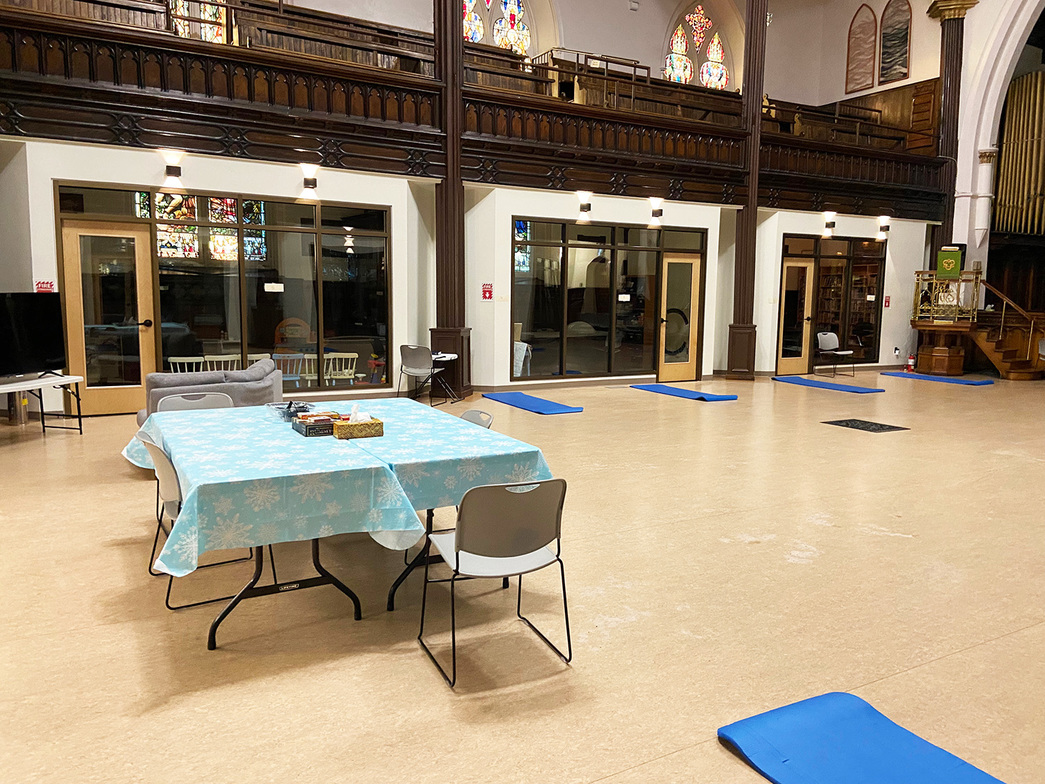 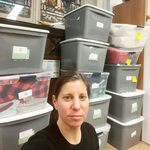 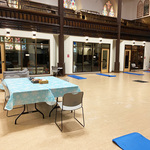 St. George’s rector Chris Vanbuskirk was weary after a three-week stint of providing 7 p.m. to 7 a.m. shelter to those who, for various reasons, do not use shelters and instead sleep outside.

He explained that at a meeting several weeks before the coldest weather hit, he asked authorities, ‘what’s the plan?’

“‘Could you guys do something?’ was the response,” he said.

The request was to open for two weeks in January, which stretched to three, after which people were welcome to use a former fire station that opened not far away.

While St. George’s is no stranger to the needs of the homeless, and provides a laundry, shower and breakfast ministry for those in need, stepping up to house upwards of 50 people a night on the floor of the church hall was demanding.

“There are all manner of addictions and mental health issues,” said Chris. “Then COVID restrictions on top of that.

Trying to manage on their own was unsustainable, he said, but someone had to pick up the ball.

“We’ve had terrific volunteers, but the needs are so deep and so many,” he said. “There needs to be a better way. The system is broken.”

Chris was at St. George’s every night to check on the situation, and every morning for the handover, but trying to rouse 50 people from sleep is a difficult task.

“When you’re in addiction, you just want to do what you want to do,” he said.

On the other hand, the community response was amazing, with donations coming in for everything they needed to house and feed people.

“The phone was ringing off the hook. The Lord’s provision blows me away,” he said. “Every day and every night, it was very clear the Lord was providing.”

While Chris spent every day managing the pop-up shelter, parish work ground to a near halt, with no time for visits, phone calls and so on.

Chris is hopeful for more long-term solutions, rather than authorities waiting until a crisis is upon them to act.

“And I think the Church needs to be involved in the next phase, but without staff, it’s difficult.”

STONE CHURCH
As Moncton was scrambling to find shelter for its most vulnerable, Saint John Harbour MLA Arlene Dunn was hearing concerns from constituents about their own vulnerable population, including one man who suffered frostbite and was in danger of amputation.

“It was a pretty serious situation. Somebody I knew said ‘call Stone Church. They’re absolutely lovely.’ That’s how it started.”

Arlene got several government departments involved, accessing $10,000 to pay for two guards for onsite security. She arranged for the Saint John Fire Department to do a walk-through to spot any safety issues.

“It seemed like we were able to cut through red tape,” she said. “Everyone just came together — corporations and people donating money and supplies. It’s tremendous to see.”

She cited two civil servants who were a great help in getting through hoops: Les Weber and Francine Scott.

“Jasmine and Terence (Chandra, priests-in-charge) are gems,” she said. “Stone Church has been a beacon of hope and light.”

One week in, Jasmine reported the make-shift shelter was operating “fairly well.”

“There have been a few little things but nothing that can’t be handled,” she said. “We’re mostly full with around 10 people.”

Each evening, clients get a bin with sleeping mat, sleeping bag and pillow. Repeat clients get the same bin each night. They sleep on the main floor of the church.

Having far fewer people sleeping in the church and two guards on duty seems to have made a difference, compared to the more demanding experiences at St. George’s.

“The province has been supportive,” said Jasmine. “They helped get us funds for materials, PPE (personal protective equipment), air filters and the two security guards.”

Volunteers have been onsite from 6 p.m. to 7 a.m. with the guards. Terence, who often volunteers at Outflow Ministry’s shelter, has done a few overnight shifts. Tony from Outflow has offered helpful guidance.

As in Moncton, the clientele is a mix of people who don’t want to be in shelters, who are homeless, addicted and/or have mental health problems.

“It’s all tied to trauma. These are complex problems,” said Jasmine.

Despite the governmental and community support, turning a church into an emergency shelter has been tiring, with Terence and Jasmine there every morning and evening to check on the situation.

“It’s been a big effort for all involved,” she said. “The volunteers have been super understanding. Everything we needed, Arlene and her office were there.”

The money to pay the security guards is part of COVID funding, which has come in handy.

“Without the security guards, we would not be doing this,” she said. “We’re pretty tired out. The only reason we can do this is because we have an end date in mind.”

Even so, there was no hesitation is deciding to open as a temporary shelter.

“It felt like the right thing to do,” said Jasmine. “We have the space, the capacity. And it’s in Stone’s DNA to do this.”

Archbishop David Edwards is especially grateful to the clergy, parishes and volunteers for their generosity of spirit.

“I am so thankful to all those who have stepped up and given leadership in meeting the emergency needs of people left homeless during this, the coldest time of the year,” he said. “I know that in most cases, this has been done at significant personal cost.”

David, once rector of Stone, is well-acquainted with the needs of those living on the streets. He is, however, distressed by the lack of forethought on the part of authorities during yet another winter.

“I have to say that I am disappointed with all levels of government, no matter their political stripe,” he said.

“Several years ago when we were involved in providing shelter for folks in Bishop's Court, part of the conversation centred on "never again" shall we be in this type of emergency situation.

“Yet across the province, here we are.

“Every year in the fall I hear the warning from those on the ground that there is a crisis coming in the New Year, and every year our decision makers seem to forget that we live in Canada and winter comes.

“The motto of the Scouting movement is "Be Prepared!"

Photo captions:
1.  The Rev. Jasmine Chandra stands in front of the bins given to each person seeking shelter for a night at Stone Church in uptown Saint John. The bins contain sleeping bags, pillows, blankets and other essentials.
2.  Sleeping mats are laid out on the sanctuary floor before the arrival of clients.
Submitted photos

Thank you to all who are involved...being willing to get out of boat and walk on the waves of the real world!

We are making donations to the Stone Church project as part of our tithe wherein we specify a portion be assigned to this worthwhile outreach. It is sad that in a 1st nation like Canada that this is necessary. We need more effort and vision on the part of our elected officials. I commend Chris who I have worked with when he was my priest in Florenceville and I was the devil that sat on the organ bench!

Indeed the system is broken - Social Development's & Department of Health's. The needs are far outweighing the capacity and much of this now-crisis is a result of NOT meeting the social determinant needs of health, letting people get sicker & sicker, needs being unmet, including those for mental health & addictions early in life. Very sad, heartbreaking in fact

Thank you to St George's and to Stone Church for practicing what we preach: "love God. Love our neighbour". God bless you all.