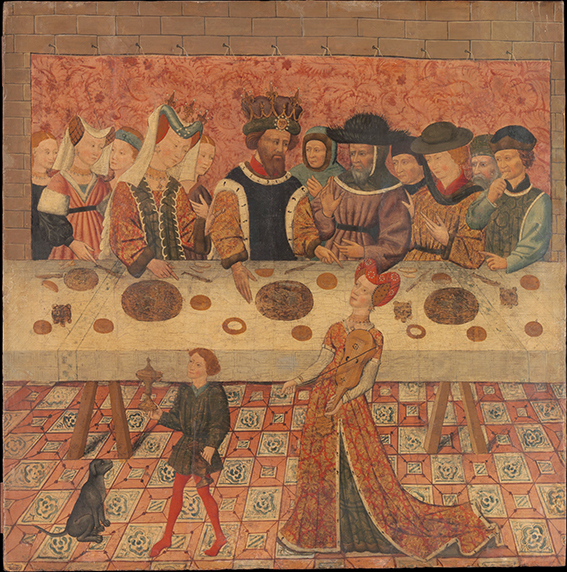 The New Testament is full of men called Herod, and all of them were nasty. It was Herod the Great who received the Wise Men on their way to Bethlehem, and who later planned to have the young Jesus killed.

Herod the Great had four sons, one of whom he had murdered. His three surviving sons were Herod Antipas, who appears in our gospel lesson, and his brothers, Philip and Archelaus.

While he was still a young man, Herod Antipas, the Governor of Judea, visited his brother Phillip, the Governor of Trachonitus. During the visit, Herod fell in love with Philip’s wife, Herodius, and she with him.

The two of them soon divorced their respective spouses, married each other, and moved to Jerusalem. With them came Salome, Herodius’s beautiful daughter.

This messy family situation was further complicated by the fact that Herodius was not only Herod’s sister-in-law, but also his niece, for Herodius was the daughter of the third brother, Archelaus.

So, just to be clear: the daughter of one brother, Archelaus, got married to her uncle Philip. She then divorced Philip, in order to marry her other uncle, Herod.

Herod himself was already married, but he wasn’t worried about that. Being the eldest son of Herod the Great, he figured he could do pretty much whatever he wanted. Most of the time, he was right.

Many Jews spoke against Herod and Herodius, but none more loudly than John the Baptist. John was famous for preaching “a baptism of repentance for the forgiveness of sins,” and he insisted that Herod had many sins to repent of.

Herod, though he was annoyed by John’s preaching, was also fascinated and confused by him. Herodius, however, was not confused at all. She simply wanted to have John the Baptist killed. Our gospel lesson this morning explains how she eventually got her wish.

As our story begins, Salome, the daughter of Herodius, dances before Herod and his court at the King’s birthday. But we must not think of this as a grade-school dance recital. Salome is flirting, angling for a wealthy husband.

It is, however, Herod, her mother’s new husband, who is smitten by her. Recklessly, he promises under oath to give her anything she wants, even up to half his kingdom.

We might expect that Salome, a young woman, would ask for a new dress, some jewellery, or perhaps a fancy party given in her honour. But, no. Salome is very much her mother’s daughter. She asks her mom what she should ask for, and Herodius answers, “the head of John the Baptist.”

Herod is distressed by this request, but he has just promised under oath to give Salome whatever she asks for. And so, in the midst of a fancy dinner party, as the guests sit down to their evening meal, Salome receives the bloody head of John the Baptist delivered on a platter.

The death of John the Baptism is a tale of ambition, treachery and violence. We may be forgiven for wondering what it is doing in the Gospel of Mark. Yet the story is important because of the light it shines upon the nature of sin, and the nature of human freedom. And at the heart of the story lies the question that Herod asks Salome: “What do you want?”

It is a good question. It is perhaps one of the two or three most important questions we can ask, not only of Salome and her dysfunctional family, but also of John the Baptist, and of ourselves. What do we really want in life? What are we willing to do to get it? And will getting what we want actually make us happy?

It is obvious what Herodias wants. She wants to be the uncontested queen of Israel. She wants people to fear her. She wants prestige and power, and in order to get these, she wants John the Baptist silenced.

She will do anything she can to get what she wants, including adultery, incest, premeditated murder, and the sexual exploitation of her own daughter. And, ultimately, she gets what she wants. Herodius remains the Queen, and is free of John the Baptist’s preaching.

But it’s doubtful that getting what she wants will bring her any real happiness.

What does Salome want? To have the head of a Jewish prophet served to her on a platter cannot have been her first choice. But she asks for this because, ultimately, what she wants is to please her mother, and to become like her. And in this, Salome succeeds completely. She is learning to become ruthless. Salome will undoubtedly become as selfish, as angry, and as unimaginative as her mom. And she will be as unhappy.

And John the Baptist: after many months in jail, he has his head cut off and delivered to his greatest enemy. Is it possible that he also gets what he wants?

Well, strangely, yes. I think he does. John doesn’t want power or prestige. He doesn’t want riches. John has chosen a severe and simple life in the desert because this gives him what he truly wants: a life poor in possessions, but rich in spirit.

Furthermore, John is free. He has no need to impress other people. He has no favours to ask. He has no pride to protect. John has spent his life preaching “a baptism of repentance for the forgiveness of sins,” and has been happy to do it because he knows that he is himself repentant and forgiven.

Perhaps what John wants most of all is righteousness. He wants it for himself first, and then for all of Israel. John wants to stand before God and be accounted a good and faithful servant. And so, having determined long ago that he would live for God, I think that John might now be happy to die for Him also.

And Herod: what does he want? Herod is the one complex personality in the story. Like Herodius, he wants people to fear him. He enjoys the prestige and power that comes with his office. Yet there are suggestions throughout the story that Herod is almost tempted to become a good man.

We are told that “Herod feared John and protected him, knowing him to be a righteous and holy man. When Herod heard John, he was greatly puzzled, yet he liked to listen to him."

Herod is not a good man. He is a cruel governor and an unfaithful husband. But, perhaps because of John’s preaching, he is slowly becoming aware that he is not a good man. Perhaps he is beginning to imagine the possibility of repentance and forgiveness. Perhaps Herod recognises in John a dignity and courage that he, the Governor of Judea, ought to have. Perhaps the great king is even a little envious of the poor prophet who lives in the wilderness.

So what does Herod want? I suspect he does not know. I suspect that Herod has no idea who he truly is, or what would make him truly happy. And so, finally, Herod does nothing. When his wife arranges for John to be killed, “Herod is greatly distressed.”

But because of his oaths and his dinner guests, he did not want to refuse her. John is killed, and the last flicker of goodness in Herod dies with him.

And finally, there is you, and there is me. What do you want? What do I want? This is a question we must answer carefully, for under the enormous freedom that God grants us in this life, we will likely get what we ask for.

Herod, Herodius and Salome: we think of them as selfish, and so they are. They think only of themselves, and how to gratify the desires of the moment. We criticize them for wanting too much.
And yet, under the bright, paradoxical light of the gospel, we might equally criticize them for wanting too little. Each of them lives only in the cramped little world of the ego. They are bound by the iron bars of pride. They are trapped in themselves.

Of the grandeur of the Kingdom of God, and the joy of participating in God’s freedom, they know nothing. Truly, God allows them to receive what they ask for: that they might live only for themselves.
It is no one’s fault but their own that they should find such a life miserable.

And John the Baptist: we praise him for being unselfish, for so he is. John thinks only of how he might serve God and his neighbours. And, by pursuing that calling in the deserts of Israel, he forgoes many comforts.

And yet, under the bright, paradoxical light of the gospel, we might equally praise John for wanting so much. It is an old, old story, and the most delightful surprise: that we gain our lives by losing them; that, by dying to ourselves, we are reborn by God; that we may say, along with St Paul: “I no longer live, but Christ lives within me.”

And so, once we must ask: What do you want? What do I want?

Jesus says, “Seek first the kingdom of God, and His righteousness, and all other things will be given to you as well.”

Thanks be to God. Amen.

The Rev. Andrew Horne is the priest-in-charge of the Parishes of Cambridge and Waterborough / Gagetown. He preached this sermon on July 11.

David Searle about 1 year ago

Dear Rev. Andrew,
Your sermon is truly a balm on my heart. Thank you. What do I want? Je veux être complètement l’homme que Dieu a voulu que je sois. The question is am I ready to forsake the dungeon of my ego? What a blessing to be lifted by your words. To have the light of the Spirit enter my eyes. Thank you. And thank you for bringing meaning to this passage that I could not really make sense out of.

I pray that all of us find the courage to ask this question.