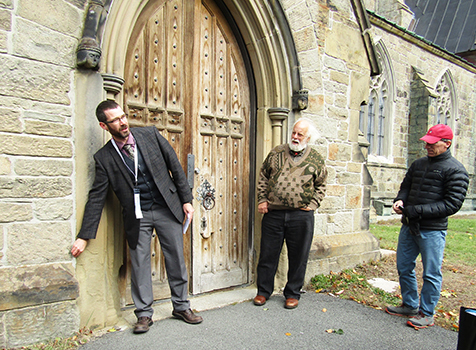 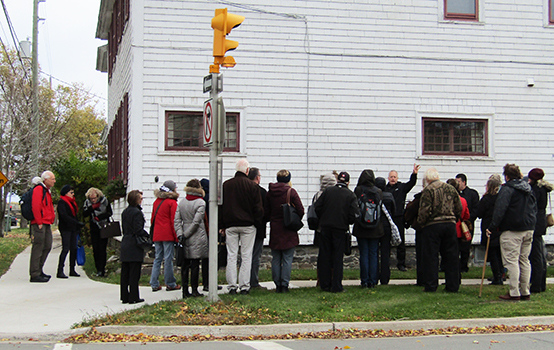 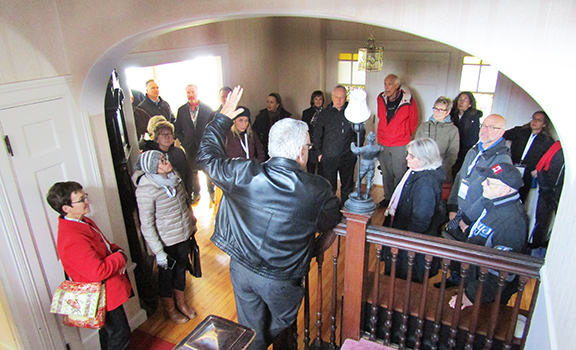 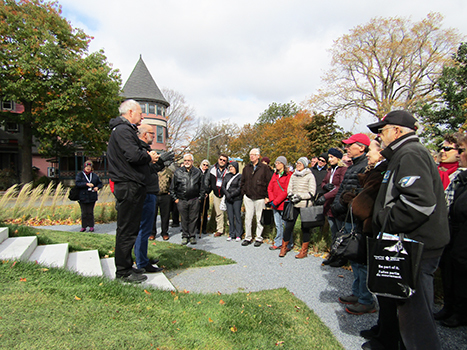 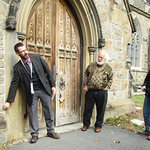 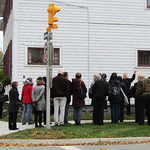 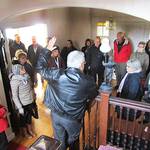 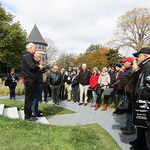 About 40 people gathered on Oct. 18 for an investigative tour and thinking session as part of the National Trust’s annual conference, held in Fredericton this year.

The National Trust is a registered charity established in 1973 by the Government of Canada, dedicated to promoting the conservation, understanding and appreciation of our nation’s heritage buildings, historic places and cultural landscapes.

The tour explored the buildings owned by Christ Church Cathedral and the Diocese of Fredericton, and what the future could hold for them. With building issues in the Synod Office, an empty Bishop’s Court and a cathedral hall that does not meet current needs, there was much to see and talk about.

The tour began at the Cenotaph, led by Robert Pajot of the National Trust and Randal Goodfellow, an Anglican from the Ottawa area and a national leader in church property regeneration. You may remember him as the keynote speaker at the 2014 Stewardship Day workshop on church buildings.

“Look behind you. What do you see?” Randal directed the members of the group. “A city park? No. It’s cathedral property.”

He pointed out The Green and its historic ownership by the church and the cluster of Anglican-owned buildings adjacent to the river.

The next stops were the Synod Office and Bishop’s Court, with Bishop David Edwards taking the lead. He noted the office came into Anglican hands in the 1980s, but the former home is not an efficient use of space. He also explained the many building failures in the past two years — the back wall of the kitchen and the plumbing replaced; the recent removal of asbestos from the basement and bat guano from the attic, and the removal of the chimney.

Adding to the challenge is the fact that both buildings are designated historic, limiting what can be done, particularly on the exterior.

From Bishop’s Court, the group viewed the plaque on Odell house, the traditional home of the dean of the Cathedral, and visited Cathedral Memorial Hall.

Randal explained that this diocese experienced the same bulge of attendance after the Second World War that most churches did in Canada, and large buildings became necessary.

“Now today, attendance is below where it was when it was good,” he said. “A lot of these buildings were built for 300-400 kids. Now there’s a handful.”

Dean Geoffrey Hall gave an overview of the facility and its challenges — space that does not meet the needs of the Cathedral, asbestos, inaccessibility and its distance from the church.

“While this space is great for many things, it’s not the best for our uses now. The overall design is not optimal,” he said, noting the lack of laundry and shower facilities as examples.

Randal noted there are seven Anglican churches in the city, along with several United churches, lots of Baptists and some Presbyterians, to name a few — too many churches for 58,000 people.

From the hall, the group continued on to the Cathedral, where Fredericton engineer Tom Morrison gave a technical talk on exterior and interior aspects of the Gothic Revival building. But first he noted its uniqueness, particularly with regard to placement.

“Having this open expanse of green, having the river nearby — a lot of what it is is how it’s situated,” he said. “It was very large scale for the time.

“This is why Fredericton is a city,” he said, pointing to the Cathedral. “The monarch wanted a cathedral here. No one in Fredericton can imagine it not being here.”

But there are issues: as the building has settled, the ground now slopes toward it, creating moisture problems. Mistakes have been made in stone repairs. Steel in stone is a bad idea, since steel corrodes and destroys the stone. The roof needs repairs. Sun damage of 170 years is showing, and so on. New construction products don’t work on historic buildings, he said.

Inside the Cathedral, Geoffrey spoke about how the building is used.

He spoke of the precarious finances, noting that 20 per cent of parishioners fund 80 per cent of the budget, and those most vocal about what happens, doesn’t happen or should happen, are among those who contribute the least. The largest sector of givers are elderly, he said.

“The Cathedral was designed for one purpose — worship. But a more flexible space might be an answer to the needs we have, or may have in the future,” he said.

The final exercise of the day was discussion in small groups. The participants chose one of three groups: those who felt the cathedral should keep its footprint and make change from within in the building; those who felt that replacing the hall with an addition to the cathedral would work best; and those looking at more extreme options.

Some of the feedback from the groups included running Bishop’s Court as an Airbnb; landswapping, perhaps with the city, to achieve goals; incorporating a social housing project; partnering with the Fredericton Convention Centre to create an inspiring, beautiful space in which to meet; having a large and serious planning conversation with stakeholders, including the city; constructing a glass addition, using Norwich Cathedral as inspiration and an example of what can be done; inviting a college of masons to do stonework; incorporating a day care in the cathedral; seeking corporate sponsors; holding Tedx presentations; using outside space for advertising, as Scottish churches do to help pay for maintenance; having festival activities in the Cathedral; the inflexibility that pews present for finding new uses; and making sure that whatever plan might be chosen, it’s a 100-year plan.

The National Trust conference continued into Saturday, with a panel discussion called Rising to the Challenges of Revitalizing Historic Places of Faith. The speakers, all of whom attended the Thursday workshop, were: