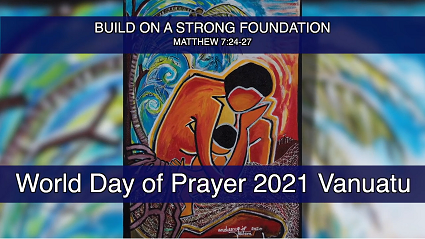 Save to your Calendar

The World Day of Prayer, traditionally held on the first Friday of March, will be broadcast on local television stations across Canada for the first time in 99 years. Each year, since 1922, a different host country has prepared the content of the World Day of Prayer service, highlighting its country’s culture and regional justice issues. The 2021 service has been written by the Vanuatu World Day of Prayer Committee and adapted for use in Canada by the Women’s Inter-Church Council of Canada. Viewers from all over the country will be able to virtually unite in prayer and action, by tuning into a broadcast or via YouTube.

The World Day of Prayer is a global ecumenical movement which brings Christians of many traditions together to observe a common day of prayer each year. Through preparation and participation in the worship service, we can learn how our sisters of other countries, languages and cultures understand the Biblical passages in their context. We can hear their concerns and needs and can join in solidarity with them as we pray with and for them. In this way, it is possible to enrich our Christian faith as it grows deeper and broader in an international, ecumenical expression.

(from What is World Day of Prayer?)