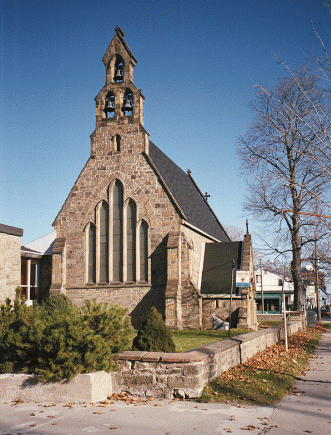 In January 1846, Bishop John Medley announced that a site had been given by the Hon. John Simcoe Saunders for a new church to be located at the corner of George and Westmorland Streets. The cornerstone for the new church was laid on May 30, 1846 by the Hon. Mr. Saunders, and prayers were offered by Bishop Medley. The church was completed within a year and was consecrated on March 18, 1847. The chapel was named St. Anne’s Chapel-of-Ease. It was stipulated by Bishop Medley that in this church the pews should be free from rent.

St. Anne’s was built to resemble the ancient chapels still existing in England, with the style of architecture being that which had been prevalent in the time of Henry III in the thirteenth century. The chancel and the nave are separated by a freestone arch and butternut screen. The tiles in the sanctuary floor, symbolic of the four evangelists, were obtained from Mr. H. Minton of Stoke-upon-Trent, England. He also gave the tiles for the nave and the porch. The Ladies of Fredericton gave the tiles for the chancel. The furniture was made of butternut, as were the roof, pulpit and altar, with their work being done by a Mr. Harding and a Mr. Aiken.

A new building was erected in 1962, adjacent to the chapel, in order to accommodate a growing congregation.