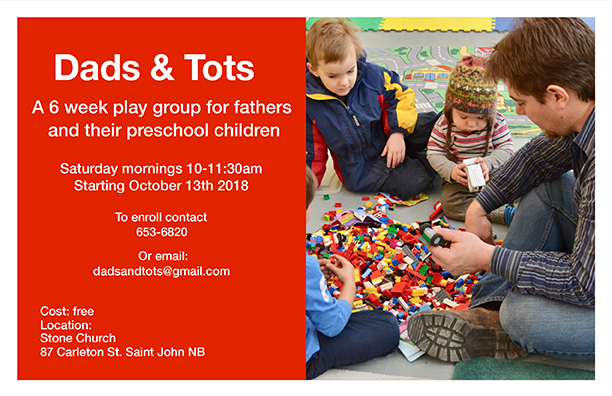 A visit to Rome will hopefully have far-reaching effects for families in Saint John.

On Oct. 1, Bishop David Edwards and Roman Catholic Bishop Robert Harris, Diocese of Saint John, will sign a memorandum of understanding to launch a joint mission project in the city.

It all stems from a 2016 visit by Archbishop Justin Welby to Pope Francis I, where they committed to working together on practical initiatives for the betterment of the world, based on John 17:22-23.

“Francis and Justin believe there is a need to see the church acting in unity, showing we have a common mission,” said the Rev. Dr. John Paul Westin, rector of Stone Church in Saint John. “It’s a way to build friendship and fellowship in the body [of Christ.]”

The first project under IARCCUM is in Malawi and involves education. The second is this one in Saint John. It began when Fawn Wilson White, originally from Saint John, and her husband, Ken White, residents of Rome, were back in the port city. Fawn has a connection to Stone Church and spoke to John Paul about IARCCUM.

“They were the catalysts and the ones who brought the idea to do a project to John Paul Westin, then to me and Bishop Harris,” said Bishop David. “They’ve been very encouraging with their support along the way.”

From there a committee was formed, consisting of clerics and lay people from both denominations, who began work on a project. But what would the project be?

“The committee was trying to identify a focus,” said Leslie Allan, an educator and early childhood specialist, who is married to the Rev. Canon Stuart Allan. “I knew there was a gap in services for supporting fathers. As we chatted, it seemed to bring a focus to the conversation.”

“We looked at programs out there for fathers and children,” said Mark Slader, a member of Stone Church. “One program had been run by a non-church group and had been successful, but it ended and wasn’t replaced.”

“Studies show that the more fathers are involved in their children’s lives, the less criminality, less mental health issues, less relationship problems and health issues there are,” said John Paul.

“They have better coping skills, and they are better able to find and hold employment — by the father simply being present in his child’s life.

“When a child enters school without their father in their life, they’re susceptible to so many of society’s ills."

The Revs. Terence and Jasmine Chandra, community chaplains in the centre of Saint John, recognized the value in such a project, and the committee moved ahead.

The planning is now complete, and the first six-week Dads & Tots will begin Oct. 13 at Stone Church, though its permanent location will be the old Fitzpatrick’s Funeral Home location, now owned by Outflow Ministries, on Waterloo Street.

The program is play-based, with space for six dads and their children ages 3-5. Plans include a block centre, creative material centre, toy cars and trucks, and more, including snacks.

Two dads, Mark Slader and Pat Desmond, were chosen to be mentors, said Leslie, “Because men relate better to other men,” but they won’t be there to do anything but support, encourage and guide.

“I like to call it organic. We have the framework and just let it grow organically from there. Dads have been diminished. We’re not there to give a morality lesson on parenting. It’s promoting healthy relationships and validating dads.”

One of the hoped-for benefits will be new relationships.

“We’re hoping the dads will get to know each other and start to form their own social networks,” said Leslie. “It’s important because a lot of families are isolated.”

The committee hopes to run the program four times a year, and fundraising will begin soon, though that’s unnecessary for this first one.

“We have a donor funding the entire first program,” said John Paul, who says he’s not worried about money.

“When people see [something like this], the money seems to come.”

Those involved are excited to see their 12 months of work come to fruition.

“I’m very grateful to the people who’ve thought through this idea from its inception, and now we’re at the point where it’s about to happen,” said Bishop David.

“It’s important — fathers and children spending time together,” said Bishop Harris. “Naively, I’d like to think that’s going on, but that’s not always happening. It’s going to contribute something special to the lives of children and the lives of fathers. It will be building something that will bear fruit.”

“As a proud New Brunswicker I am delighted that the first jointly sponsored Anglican-Roman Catholic outreach project initiated in North America in response to the October 2016 Common Declaration of Pope Francis and the Archbishop of Canterbury should be launched in Saint John,” said Fawn.

“The project will benefit some of our most vulnerable and most at risk. Bishop Robert Harris, Bishop David Edwards, Fr. John Paul Westin and Fr. Doug McNeill are to be congratulated for their vision and initiative, and I hope that this early childhood intervention program will be just the first of many such ventures in Canada and beyond!”

“In one way it’s a very humbling thing — six fathers and their children — but we’ll build on that,” said John Paul. “It’s a repeatable program and dads can sign up again for it. We hope it will build by word of mouth.

“We’ll be constantly evaluating and tweaking, but we won’t see quick results. Those are one year, 10 years, 20 years down the road.”

All are welcome to witness the signing of the document to officially launch this project. Join the bishops at Stone Church, 87 Carleton St., Saint John at 10:30 a.m. on Oct. 1.

Ministries
Innovative Ministries
Comments for this post are now off.