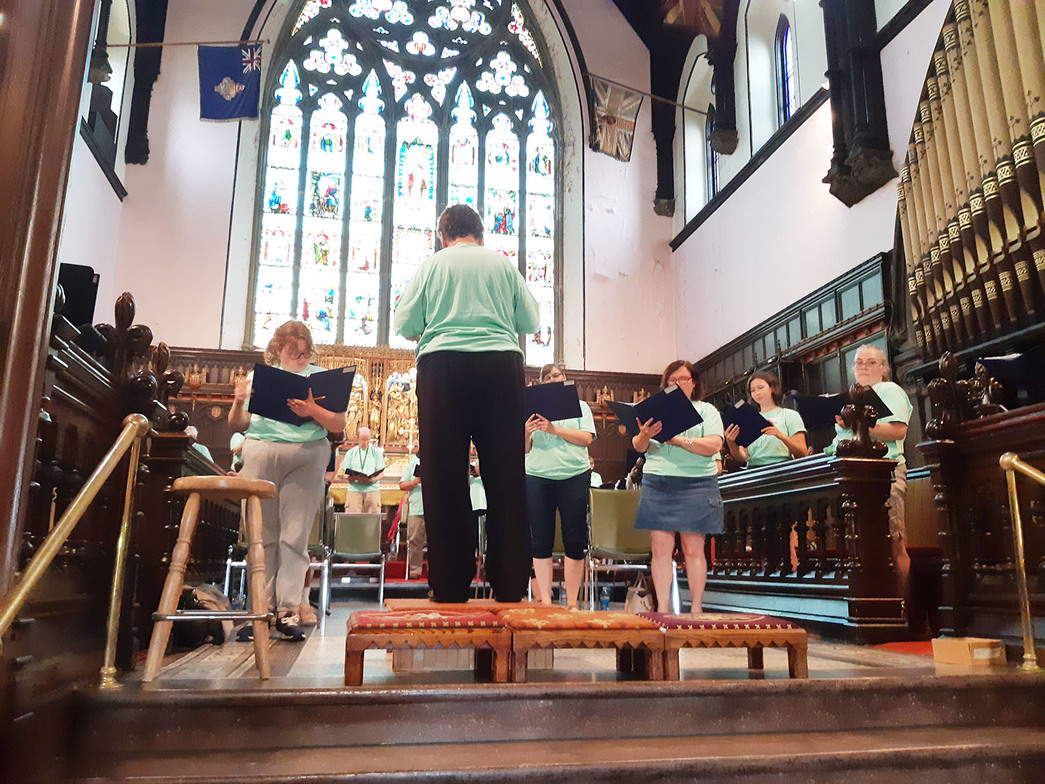 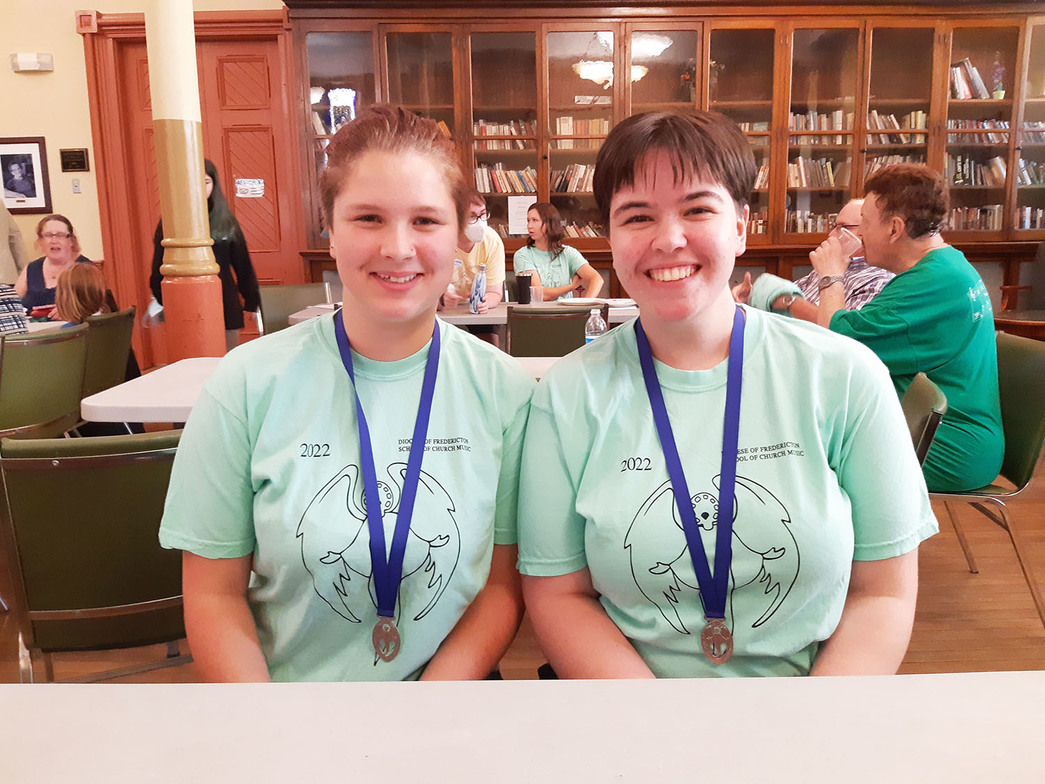 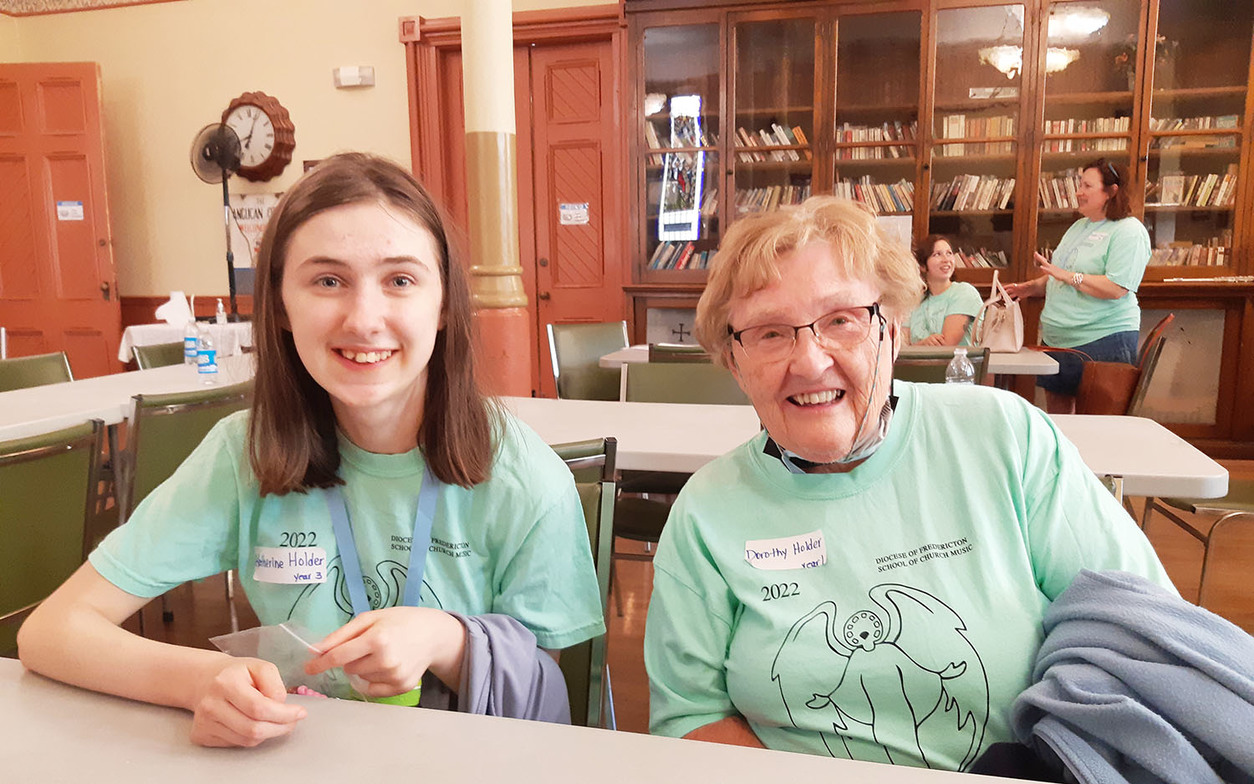 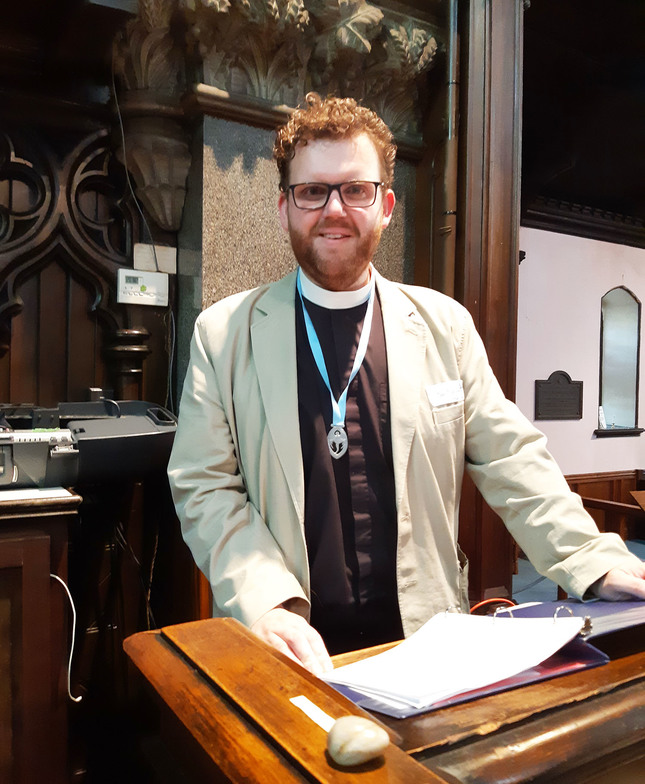 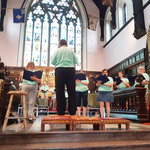 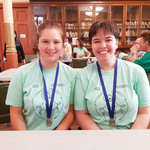 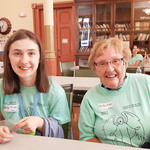 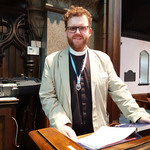 It was not the usual week-long event, but a one-day workshop hit the mark for 45 youth and adults at Diocesan Choir School. They learned music and rehearsed all day in preparation for a Choral Evensong presented at Trinity Church in Saint John July 16.

“This is a way of easing back into singing,” said the school’s administrative director, the Rev. Paul Rideout. “People are comfortable coming to a one-day workshop.”

While Paul accepted the volunteer role a few years ago, this is his first time as leader of the in-person version of Diocesan Choir School — despite planning and hoping for a gathering last year.

“Out team was resolute,” said Paul. “We couldn’t go another year without a meeting.”

Losing momentum, particularly among their young members, was a concern, he said.

“This is a very different year for us,” said registrar and nurse Sherry MacPhee. “There is perhaps some hesitancy.”

But overall, she and Paul were happy with the turnout.

Lily Cyr-Ouellette, 15, and Julia Nixon, 16, couldn’t wait to return, because this year meant a step up from mere chorister to counsellor-in-training.

But with fewer kids to mentor over a very short period of time, “it’s more like taking care of kids at a vacation bible school,” said Julia.

Both received 5-year medallions for their ongoing participation in Diocesan Choir School and both are dedicated to the event.

“It was never a question [of would I go],” said Julia. “I’ve always loved it. You can’t just give up at four years and not go. Having music built-in helps the structure. It’s different from other summer camps.”

Lily booked time off from her summer job to attend and plans to continue.

Dorothy Holder, 81, finally fulfilled a wish she’s had for decades. This year was her first time at Choir School.

She sang in the choir as a child at St. Andrew’s in Miramichi and still sings in the choir — at the Parish of Portland. Many times she planned to sign up, but something always got in the way. This year, her granddaughter, Katherine, encouraged her grandmother to join her.

“I’ve really enjoyed it!” she said.

The friendships and the music keep many people coming back year after year.

“I cannot stress enough what choral singing does,” said Paul. “To be able to sing together, it brings out the best.”

As Paul welcomed everyone to the service, he noted the value of choral singing, as a diocesan ministry, as a relationship builder and as a memory maker.

Funding for this year’s Diocesan Choir School came from the Anglican Diocese of Fredericton, the Fulford Trust of the Anglican Foundation, the diocesan and various branches of the ACW, St. Paul’s Endowment Fund,  the Segelberg Foundation, St. Anne’s ACW, and parishes and churches represented by the choristers and staff.

For more information:  www.anglicanchoirschool.com or search ‘choir school 2022’ on Facebook.

Diocesan Choir School is trying to update its archives. If you attended in past years, send your name to Lynn Mills:  plplabel@xplornet.ca   Photos and memorabilia are also welcome.

2.  Lily Cyr Ouelette and Julia Nixon were both excited to move from choristers to counsellors-in-training this year. Both have made Diocesan Choir School part of their summers for several years.

3. Katherine Holder and her grandmother Dorothy, both attended Diocesan Choir School this year, Dorothy for the first time.

It was a long day. We drove down from Moncton on Friday. A lot of singing, Spencer had chosen a lot of music we had sung before so we did not have to learn that much new music. It must have been more difficult for those who were there for the first time - or maybe just a second time. As usual it all came together at the service and it was so nice to be able to sing God's praises again as part of a choir. Only the second time Judy and I have sung in a choir since COVID. Looking forward to Choir School 2023

As one of the veterans at Choir School, I look forward to our being able to safely return to our traditional format next summer.

A ‘God moment’ for Baby Edward and his family