Health & hope: how childhood trauma impacts health, and what to do about it

Missioners learn to ask ‘what happened to you?’ rather than ‘what’s wrong with you?’ 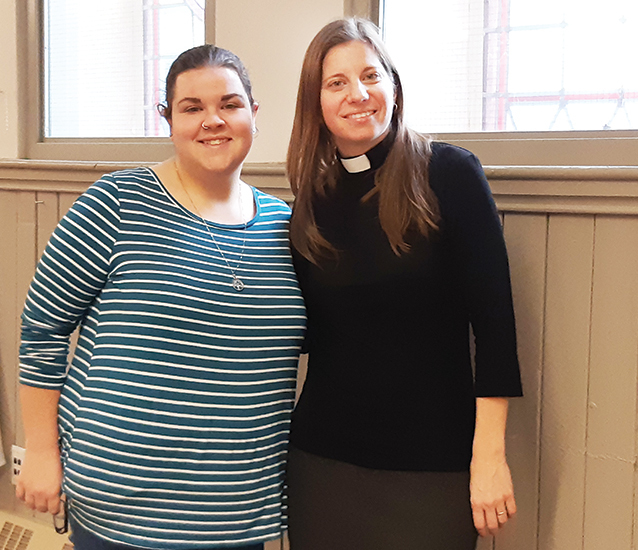 Erin (Hodge) Rideout and the Rev. Jasmine Chandra are rather familiar with the streets and people of uptown Saint John. It’s part of their jobs to know. Erin runs Inner City Youth Ministry and Jasmine, together and her husband, Terence, run the Central Saint John Community Ministry — both Anglican outreach missions to the city’s poorest.

Now they have a new tool to help them do their jobs more effectively, and it’s called ACE Interface.

Both underwent intense training in November to begin the path to becoming master trainers of the concept. It was their networking within the city that led to the invitation for the free course, hosted by Horizon Health and the Saint John Boys & Girls Club.

This training came with a unique status: they and the other 28 participants are the first in Canada to take the ACE program.

After a bit more study and some presentations to hone their skills, they’ll train others to teach it. But for now, both women would like parishes, priests, church groups, volunteers and others to know they are available to give short presentations on what they learned.

WHAT IS ACE INTERFACE?
The ACE (Adverse Childhood Experience) concept has its roots in a scientific study from the 1990s. It involved 17,000 people and looked at if and how childhood trauma impacted health.

Dr. Rob Anda was one of the co-principal investigators of the study and the ACE training is the continuation of his work. He was one of the facilitators at the course the women took.

The study showed that childhood trauma has a huge predictive link to such issues as heart, lung and liver disease, addiction, asthma, cancer, depression and obesity, to name a few.

ACE begins with a tool — a test to indicate exposure to possible childhood traumas.

Higher scores, of course, are linked to greater physical and mental health issues later in life.

“When Terence and I talked about our ACE scores, we were able to talk about things that happened in our past and how not to pass on those negative experiences to our kids,” said Jasmine.

The women learned that lots of people have high ACE scores. Even their training cohort, consisting of teachers, social workers, health care professionals, and crisis intervenors from many walks of life, had higher scores than the average from the original 17,000 in the study.

“This is passed generationally. It becomes part of the DNA. When a parent has an ACE score, it’s more likely their spouse will, and their children will,” she said.

Perhaps what impresses the women most about what they’ve learned is that there’s a new way to look at people when you understand the trauma they’ve endured and how it’s shaped their lives and their families.

“Instead of asking, ‘what’s wrong with you?’ you ask, ‘what happened to you?’” said Erin.

“It helps people tell their stories so it shifts the blame away from them,” said Jasmine.

In Saint John, governments have invested millions over the years to help combat child poverty, yet not much has improved.

“We’re dealing with a different population here,” said Jasmine. “One thing in Saint John is the well known [sexual] perpetrators here. Think of the impact that has on communities and families. There is a large population with high ACE scores.

“If we can communicate the content [of ACE], it opens up the conversations and looks at preventing further damage,” she said.

ACE & MINSTRY
For some, this link between childhood trauma and a host of emotional and physical issues is quite plausible.

“For others, it is life changing,” said Erin. “For people who think everything is a choice, this will be a paradigm shift. For those people, this science will be hard to swallow.”

But the science has a rather upstanding partner: the U.S. Centres for Disease Control and Prevention (CDC). On its website, it describes the study as “one of the largest investigations of childhood abuse and neglect and household challenges and later-life health and well-being.”

Jasmine and Erin took this course with a goal in mind: to share it — so that people can better empathize with those who’ve endured childhood trauma, so people can recover from it, and so the community can prevent the generational harm from going further.

“There’s definitely a strong place for faith to play a part in healing,” said Jasmine. “The authors [of the study] included the faith community and talked about us as healers.”

“The goal is to change the mindset and the values and to understand ourselves,” said Erin. “It’s not a program we run at church. It’s really a mindset. We’ve asked ourselves, ‘what could trauma-informed ministry look like?’”

The women are available for presentations of one hour or longer. Contact Erin: icymsj@gmail.com or 506-647-9813. Contact Jasmine: jasminechandra@gmail.com .

PHOTO: Erin (Hodge) Rideout and the Rev. Jasmine Chandra are ready to offer presentations to church groups and other organizations on the ACE concept. McKnight photo

Dianne Craft over 1 year ago

I am so glad to hear that finally someone has seen the link between trauma in childhood and the health of these individuals as they get older. I regret it has taken them so long to figure it out. After being a Mom of 2 by-polar children and an EA in the school system for 28 years, we had an adage for 80% of problems that occur in a child's school day. To know and understand the child, you must first know the parents and siblings.