with the Rev. Canon Albert Snelgrove 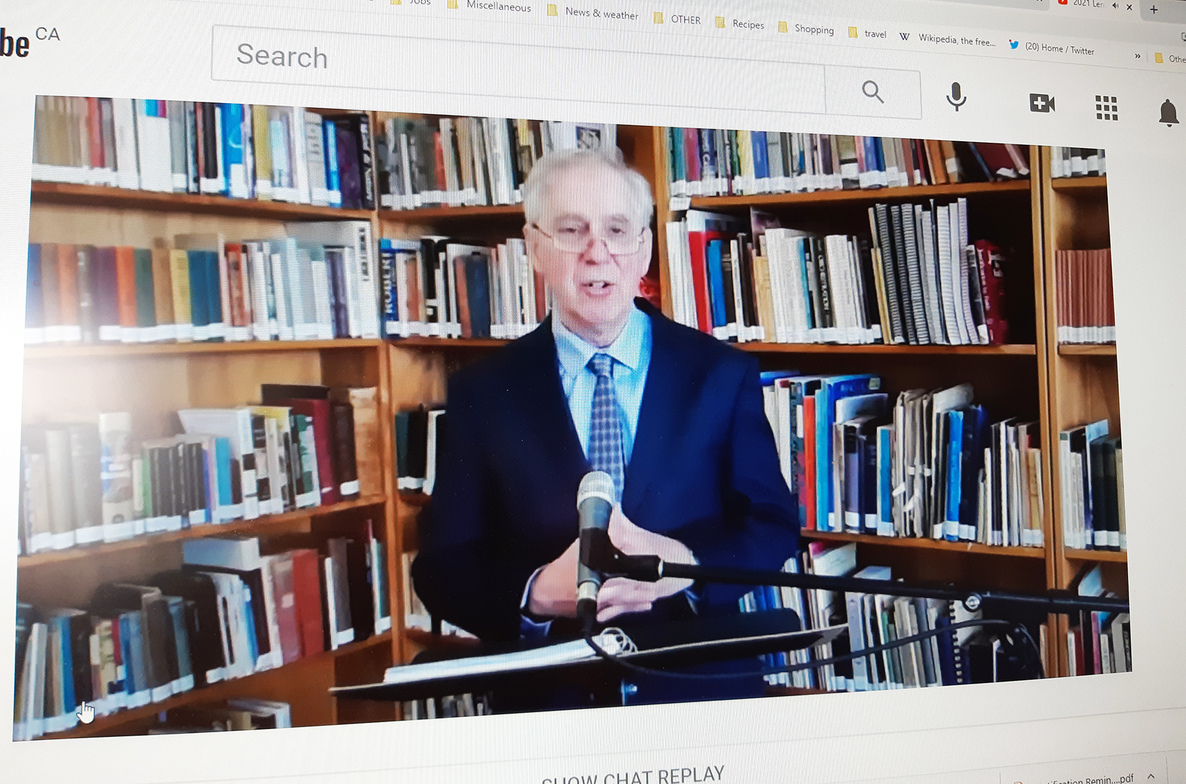 Retired Bishop Bill Hockin reprised his Lenten Talks this year, presenting it online only, as he did with his Advent Talks in late 2020. The series of four talks, called Hope in Hard Times, had two speakers besides himself: Dr. Barry Craig and the Rev. Canon Albert Snelgrove.

The fourth talk, by Albert, was entitled “Our Gethsemane Moment” with the scriptural reference of Luke 22.
Albert began with a summation of the past year: pandemic, political tensions, riots, racial injustice, isolation, illness, death.

“We are in hard times, but not only group issues. A lot of folks are facing personal hard times: sickness, disability, physical and mental health, challenges to family life, loneliness, homelessness, addiction, death,” he said.

“In the Christian calendar, this is Holy Week,” he said. “It’s a tough week.”

Albert remembered the hymn called “Were you there when they crucified my Lord?”

“This is a week of pain, violence, betrayal, abandonment, manipulation, political and religious leaders abusing their power,” he said. “But it’s also a week of resolve, determination, quiet trust and faith, and ultimately a week of love and life.”

The focus of Albert’s talk was those moments in the Garden of Gethsemane when Jesus prayed to God before being arrested.

“It was a very raw moment,” he said. “We often refer to it as the agony in the Garden of Gethsemane.”

Three of the four gospels recount the intense moment of Jesus asking God to take this cup from him; nevertheless, not my will, but thine be done.

Peter, James and John were witness to a new aspect of the character of Jesus that night — his soul broken open before them, said Albert.

Albert noted that the word gethsemane means olive press. Olives were taken to the gethsemane to be pressed, crushed to make something new, not unlike the experience of Jesus as it began that night in the garden.

Albert cited writer Max Lucado, who wrote that the next time you wonder if God really sees the pain here on earth, remember Gethsemane.

“God knows hard times,” said Albert. “Life can be like a press, squeezing in on all sides. God knows troubles. He knows your troubles.

“He knows you don’t always feel up to the demands. He knows that you wrestle inside. He knows the feeling of inadequacy, the sacrifice too great, the price too high,” said Albert.

In the garden, what Albert finds touching is the fact that Jesus wanted the companionship of Peter, James and John. At other times, Jesus wanted to be alone to pray, but not on this night. He wanted his friends nearby.

“If Jesus sought and needed the support of others in hard times, is there not a message for us — to seek out our companions in hard times?”

Albert noted the importance of reaching out to others in our difficult times, and being a support when friends are experiencing their own troubles.

In Gethsemane, Jesus felt the power of his enemies who were on the verge of dragging him away to humiliate, torture and execute him.

“And Jesus felt the disappointment of his friends, falling asleep, betraying and denying him, abandoning him,” he said. “Jesus must have felt the incredible weight of going to the cross, carrying the sin of the world.”
And as he prayed, there was no last-minute change of plans.

The African American professor and pastor James Cone wrote several books, including The Cross and the Lynching Tree, and The Spirituals and The Blues. He noted the amazing fact that so many African Americans have embraced the Christian faith, even though it was the faith of slave owners.

“You’d think they’d not want anything to do with their religion,” said Albert. “Remarkably, many African Americans found hope and strength in the gospel of Jesus Christ.”

What the slave masters did to them was a lie, said Albert.

“They were not less than human. They were children of God. They had value, dignity, worth in the eyes of their heavenly father,” said Albert.

“They sang with expectation that God was going to deliver them from this horrible condition.”

The evidence all around them was not promising, “yet they could not stop singing and believing in a God in whom they put their trust.”

“Doesn’t that shock you a bit?” asked Albert. “The song is talking about incredible trouble, and it ends with ‘Glory Hallelujah!’”

It’s not a denial of problems, but an affirmation of faith that God is our companion in hard times, said Albert.

“Troubles are not the final word. God is here to give us light and glorious life,” he said. “Hard times help us get through and not lose our souls. Glory Hallelujah!”

Albert ended his Lenten talk with the Breton Fishermen’s Prayer: “Dear God, be good to me. The sea is so wide and my boat is so small.”

Dan about 7 hours ago

What an impressive content! Thanks admin Fishing Charters Tampa