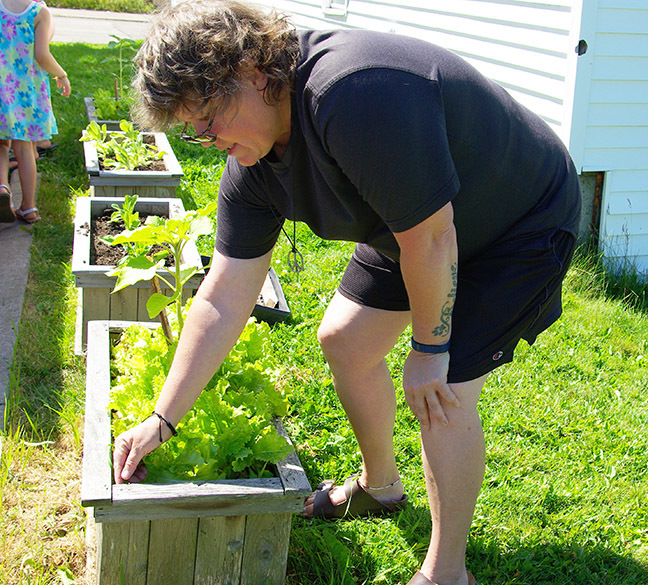 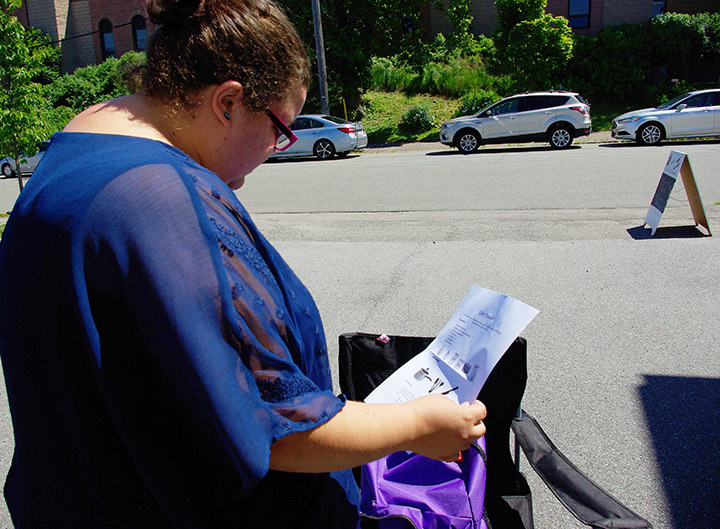 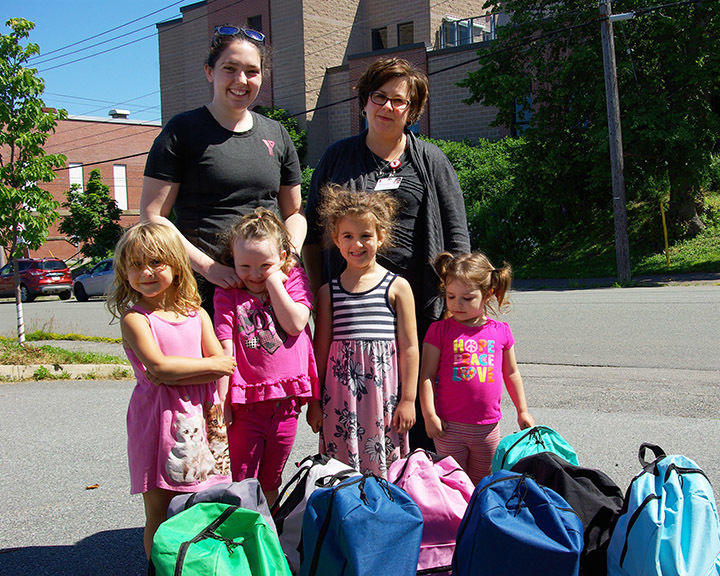 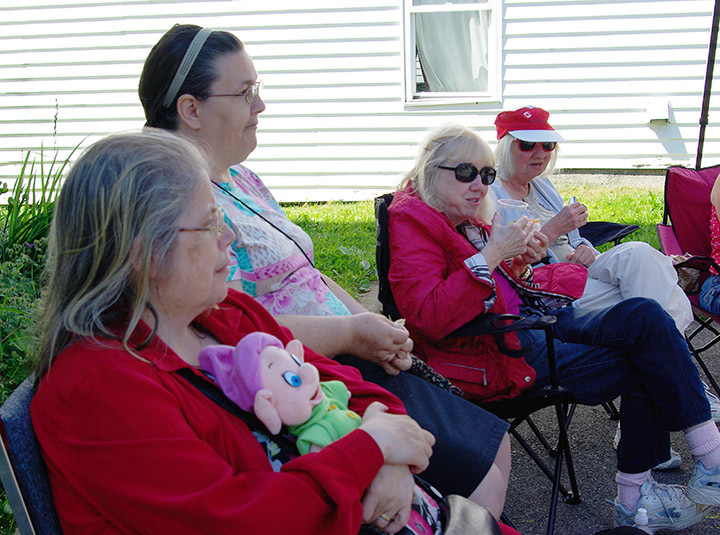 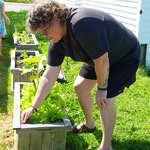 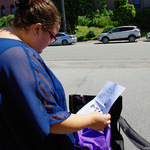 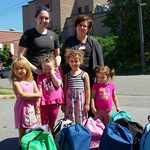 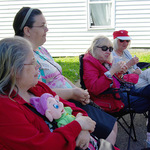 “Would you like a sandwich? It’s ham and cheese today,” says Erin Hodge.

Twice a week, Inner City Youth Ministry’s Lunch Connection – Summer Edition, with Erin and several
helpers, sets up a couple of tent shelters on a rectangle of asphalt in the lower south end of Saint John.

Add some lawn chairs and you’ve got a lunch gathering happening every Tuesday and Friday.
Dozens of people come and go. Kids play with bubbles, books and sidewalk chalk. Many are here with their grandparents.

Some people get a sandwich, granola bar, fruit and a drink and leave immediately. Others stay and have lunch with their neighbours, happy to have a social time.

Today’s sandwiches are garnished with lettuce grown in raised boxes on the edge of the asphalt, tended by a helpful neighbour named Karen. All 64 sandwiches will likely be gone soon. Word has gotten around.

This is a mission feeding a neighbourhood.

“Last summer we averaged about 45 sandwiches each day,” says Erin, who runs ICYM. “This year we’re sitting at 70. We see the same faces often.

“We get all ages, as you can see. We get a lot of seniors, neighbours. We’ve got a good mix. It’s great to have an intergenerational thing going on.”

There is more than lunch going on, though. This is also where community resources can be found — a community health nurse, for one. The Chandras — Revs. Jasmine and Terence — also make connections here as part of their Central Saint John Community Ministry.

“It’s basically a connection point in the neighbourhood,” says Erin.

It takes a long list of partners to pull this off, and Inner City Youth Ministry has a lot of them — PULSE (People United in the Lower South End), Waterloo Village Neighbourhood Association and Horizon Health. The Port of Saint John contributes. The Saint John Public Library sends a couple of staff and a wagon full of books and activities for the kids. Others are simply engaged volunteers, both from nearby churches and within the neighbourhood.

This summer, ICYM, run with funding from the Anglican Diocese of Fredericton, the Parishes of St. John (Trinity) and St. Mark (Stone) and other generous donors, is picking up where it left off last summer with an expanded program. Not only are they providing lunch again this year, they’re also handing out backpacks to kids aged 3-8 each Friday. The backpacks contain a recipe and all the food required to make it; a story book; snacks for kids; and community resources.

The backpack program is funded by a grant from the Saint John Community Foundation. The kids return the backpacks on Tuesdays and pick them up, refilled, again on Fridays. The program began the first Tuesday after school was out, and will end the last Friday before school begins.

All this effort stems from ICYM’s regular Lunch Connection program. During the school year, ICYM
provides lunch to three schools a week. One of those schools, St. John the Baptist-King Edward, is across the street from the asphalt plot, and volunteers, led by Erin, use the school’s community kitchen to make the sandwiches.

But the entire program has more than food in mind. It’s a huge effort to help families engage together.

The recipes in the backpack are basic and require little more than a pot and a knife. The recipes are kid-friendly with illustrated instructions.

“It’s done in a way so kids can cook as well,” says Erin. “And we encourage people to add ingredients on their own, like salsa.”

“Any time the kids bring their backpack back on time, or if they send a photo of the food they made,
they get their name in a draw,” says Erin, adding that one family went camping with their backpack and shared photos, not only of the trip, but of the meal they made.

Erin prepares the menus with simplicity in mind. She does a lot of planning, ordering and shopping.
When that’s complete, Erin, Penny from Waterloo Village Neighbourhood Association and Heather from Horizon Health pack them for distribution. It’s been a busy summer for this little team.

“The program takes up a lot of time,” she says. “It’s the most work-intensive program besides camp.”

The children’s books are another treasure in the backpacks. They, too, have been chosen carefully, most with a food theme and at a reading level that children and parents can enjoy. The books are to keep, and come with a laminated activity sheet that poses questions and suggests activities after reading the story. It’s another way to keep families engaged.

“It encourages reading together,” says Erin.

“It’s almost like Christmas when the kids get their backpacks — to see what they can make. They’re
saying ‘we get our backpacks today,’” says Barb Perry, a neighbourhood volunteer who often brings
children to the Lunch Connection.

There are 39 kids registered for the backpack program, 14 of whom attend the YMCA’s Early Learning Centre across the street.

At the end of the summer, the backpacks will go home for the last time, filled with whatever families
need — food, snacks or even school supplies.

The backpack program has been a popular success, but Erin is unsure about its future.

“Next year, we won’t be able to apply for the same grant, so sustainability is a question,” she says.
By 12:30, the 64 sandwiches are gone, so the plan is to make 72 sandwiches the following Tuesday — with lettuce grown onsite, of course. The need is great, but thankfully, there are many hands ready to meet that need.

Ministries
Innovative Ministries
Comments for this post are now off.