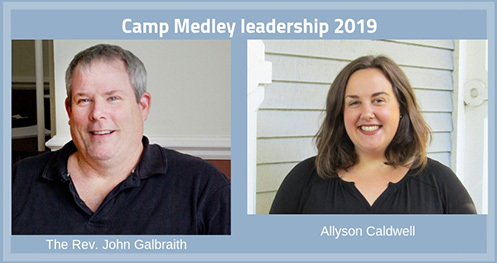 Finally, the Rev. John Galbraith, 54, has the job he has always wanted — director of Camp Medley.

He had it once, from 1989-1992, but other opportunities took him away. But since then, you might say he’s been a bit obsessed with the Anglican summer camp on the banks of the St. John River at Upper Gagetown.

“I have never stopped thinking about Camp Medley,” he said. “Everything I do, everything I see, I process through the eyes of Camp Medley. I’ve never been able to let it go.”

He always knew when he left the first time that he’d be back, and he’s been preparing ever since he left. Wherever he went camping, he’d have a good look around, noting the layout, what worked, what programs were offered, taking mental notes for the time when he’d put them to use.

Now is that time. The role began the first of January, is part-time and year round. It involves oversight, managing and marketing a facility that has a lot of untapped potential for rentals, retreats and other uses.

Former acting director Allyson Caldwell will take on the role of summer camp manager, dealing with the day-to-day demands of operating the summer program. John, a priest in the Parish of Douglas and Nashwaaksis, will continue there part-time.

John’s first introduction to Camp Medley came in 1982. Someone called him and asked if he’d like to be the canoe instructor at Camp Medley. He’d never been in a canoe in his life and he had never even heard of Camp Medley. It was a church secretary in Saint John whose sister was dating John’s brother that thought John might be a good fit for camp.

So he took a weekend canoeing course, and he asked his mother about the camp. It turned out she was very well acquainted, having taken hundreds of girls from a Saint John orphanage and Girl Guides to the camp every summer for years.

“Even my grandmother would go and help the cook — and I never knew any of it,” said John.

John considers that first summer at camp pivotal in his life. He had been Anglican as a child, then switched to the United Church with a friend in his teens, and he was a Christian. But working at camp cemented his life’s path.

“There was this guy at high school that was different from everybody else,” said John. “I wanted to get to know him but I never had the chance. He was older than me. On the first day of camp, he was the first person I saw — (the future Rev. Canon) Chris VanBuskirk.

“We were roommates, and that summer was a big part of changing my life,” said John.

John continued as the canoe instructor for two more summers. But by then he’d graduated from high school, was studying carpentry and took a job at Moosehead Breweries. And he spent a summer on a mission trip to Honduras. He arrived back just in time to be a counsellor for senior teen week.

“That’s when I met my future wife,” he said. “I was standing there with some other guy and saw her and said ‘who’s that?’ The guy said, ‘you don’t have a chance!’”

It took him seven years to convince Jackie Mollins to marry him! In the meantime, he came back to camp in 1987, rising to director in 1989.

Through these years, John attended Ontario Bible College studying youth and camping ministry. He and Jackie married in 1993 and for several years John worked with inner city kids in downtown Fredericton through Christ Church (Parish) Church.

It was the Rev. Canon Pat Drummond who asked John if he was going to apply for the youth ministry job open at St. John the Evangelist on the north side of Fredericton. He hadn’t known about it, but he applied and got it. With a short break of 18 months along the way, John has been there ever since, ‘falling in love with parish ministry,’ he said.

“I’ve done ministry my whole life, but being a priest was not really my intention,” he said. “It’s not that I didn’t think about it, but it wasn’t mine to pursue. I had to wait until God opened a door.”

God opened the door using Bishop David Edwards, who made the suggestion one day during a meeting the two were having. That led to his ordination as a deacon in 2017, and as a priest in 2018.

Now that John and Jackie’s children are teenagers, John believes the timing is right to pursue his camp calling. Members of the congregation at St. John’s have already pledged support for him at camp, he said.

“It’s my calling to grow the ministry of camp,” he said. “One of my greatest assets is hospitality, and I think that’s an important component in ministry.

“My goal is that everyone who comes through the door at Camp Medley feels ministered to when they leave. They’ll know it was worth it — campers, staff and volunteers.

“The timing of this is unbelievable,” he said. “I think I’m ready and prepared for the task at hand.”

Betty Scovil over 3 years ago

John, you will be an excellent director of the camp. It certainly is your calling. May God bless you and Jackie as you take up this challenge

Bob LeBlanc over 3 years ago

Congratulations John and welcome home!
Wishing you every success in your ministry at Medley...
God is Good!

Mary Anne Langmaid over 3 years ago

It's about time! lol I am excited for you and all that is to come in the direction of camp. Blessings in every part of this new adventure.

Douglas Painter over 3 years ago

How are you the same exact age as me John? Lol blessings to you both.

" A Demanding task will be best served by an intense loving spirit." Your more than overly qualified for this task at hand. We are most fortunate to have you in this position. May God be with you in this endeavour.

Clare Box over 3 years ago

Great news and a great story. Your gifts and compassion will be well utilized!

Sally Dibblee over 3 years ago

I remember you back in '82. Your passion and calling shone brightly even back then. Congratulations!

Samantha Stevens over 3 years ago

Congratulations! You deserve it, I am so proud of you. Best times at Camp Medley was when you were there fulltime with me I think it was a year... Anyway GodBless and again Congratulations!

Marie Nagel over 3 years ago

John, so excited to see this - may God richly bless this ministry he has called you to and may you be blessed in turn by the people you cross paths with in every aspect of camping ministry. These are exciting days for Camp Medley!!!

Angela (Mills) Aguinaga over 3 years ago

Congratulations, John! It seems like a lifetime ago since I was counsellor and kitchen staff at camp ...and I guess it has been over 30 years! Wow!
I am constantly amazed the way God’s plan for us unfolds! I am happy for you!

BettyAnne McDorman over 3 years ago

Well done John! The Perfect Match. God bless you and your family.

Julian Aldous over 3 years ago

John, so good to read this and see that your heart's desire is coming to fruition.
I know that you are going to be used by God incredibly in this role and pray that you reach so many with the love of Jesus.
I look forward to hearing good things.
Be blessed John as you take this wonderful step for Him.

Tammy Cornfield O'Toole over 3 years ago

John I am unbelievably happy for you with this wonderful opportunity to come back home to Medley! I remember the days having you as my canoe instructor then working along side if you as staff. You always had a sparkle in your eye when talking about Camp Medley. All the best!

Cathy (Smith) Wetmore over 3 years ago

John, you will do an awesome job. I wish I were there to witness your ministry. So happy for you. We certainly had lots of fun there and I’m sure there are plenty more memories to make. Miss you and God Bless!!

Kate Rogers over 3 years ago

Some of my favourite childhood memories are of Camp Medley. I recall when we had congregational picnics, family weekends and, my all time favourite, choir camp. The setting at Camp Medley was perfect for music making. First time I ever sang, Sound the Trumpet! It’s a beautiful spot. You are blessed to be there, John, and Camp Medley is blessed to have you. Enjoy!

Justine Blizzard over 3 years ago

Need a counsellor? Camp is blessed my friend.

Tracy Seeley over 3 years ago

I cannot imagine anyone who is more 'Camp Medley' than John Galbraith. John has gifts that have touched the lives of so many young people that went through that camp years ago. I am so happy that he will be back in the driver seat again.
Congratulations John!

Kathy Sinstadt over 3 years ago

Congratulations Rev John, always glad when people have their hearts desire be reached with such passion. All the best !