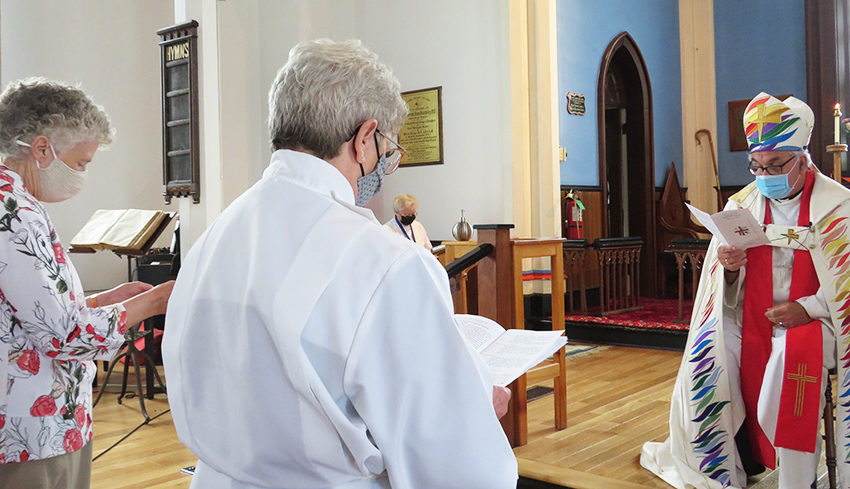 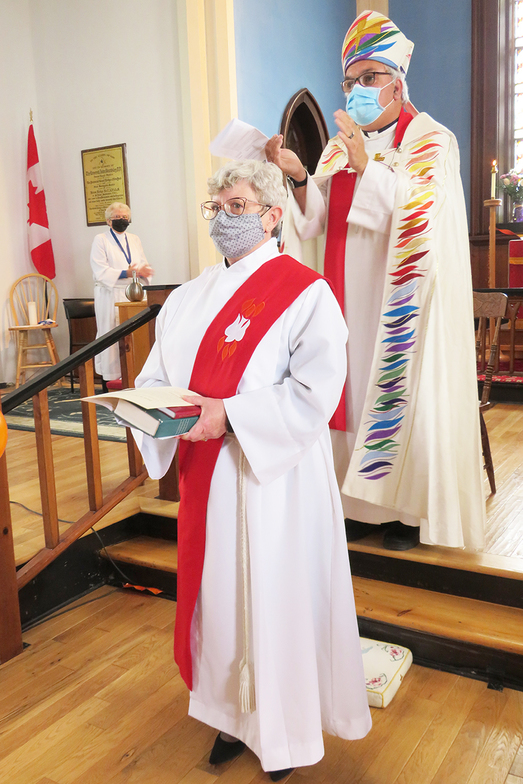 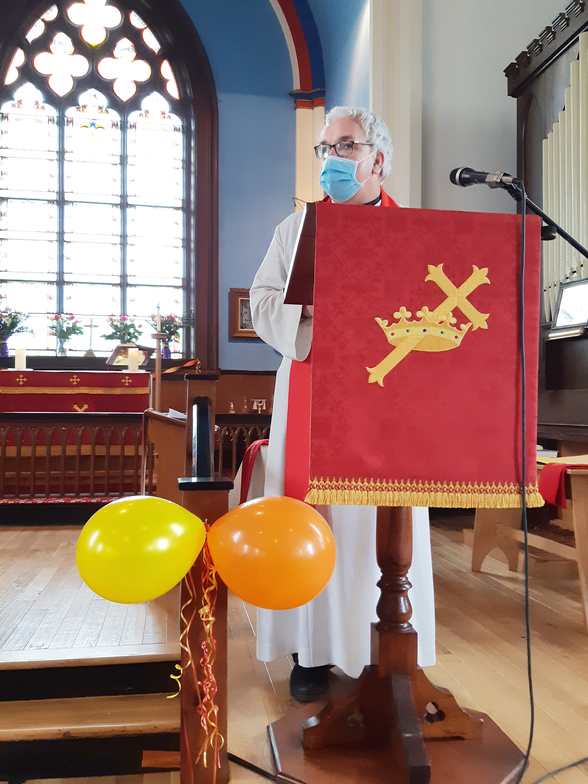 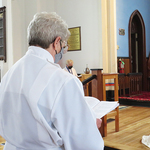 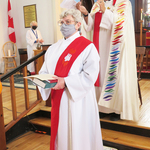 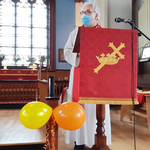 Sharon Arbeau was ordained to the vocational diaconate at Trinity Church in the Parish of Kingston on May 23.

A socially distanced crowd attended, seated both on the main floor and the balcony. Before beginning, the Rev. Douglas Painter gave a thorough rundown of COVID procedures for the crowd, which included many visitors.

Archbishop David Edwards presided. This being Pentecost Sunday, his sermon focused on the book of Acts.
“On the day of Pentecost, the Holy Spirit came to empower the Church,” said David, adding the canon stalls at Christ Church Cathedral are always a good reminder for him, since each one has a carved flame above the head of the person sitting there.

In speaking of Sharon’s ordination, David said the office of deacon had been historically ignored in the Church.

Some might see this role as something new to Sharon, but she’s had it, more unofficially, for a long time.

“It’s a culmination of ministry that has existed for many years,” he said of her ordination.

Regarding chapter 2 of the Book of Acts, David said with the speaking in tongues, God showed his willingness to bring the whole of humanity back together. But what will that look like? he asked.

Then he told the story of a parish church in a village in England. About 35 years ago, they began praying for a way to make God known in their community, to bring the Church to the people.

Their church had burned down, and their prayers came from a new location. They wondered what they could do in this new place, which happened to have a soccer field next door.

“The soccer team was the most important, unifying force in the village, but there was no kids’ team, so they set up a kids’ team,” said David. “Then others wanted to help, and eventually, the guys from the church got on the soccer board.”

Later on, they were asked, “Do Anglicans do catering?”

Why, yes, we do, was the answer. They catered the end of season banquet, and in the meantime, were asked if they could provide an after-dinner speaker.

The group went to “Christians in Sport” and got a Christian soccer player to speak.

The church has put on this event, with catering and Christian speaker, every year since, “and now soccer and the church are integrated,” he said.

Since then, they’ve expanded their building to include after school programs and other community events.

“The ministry here can’t be wholly Sharon’s or wholly Douglas’s,” he said.

Every church is meant to carry the image of God into our communities.

“The Holy Spirit will meet us there, and help us discover our role in the community.”

David recounted the week’s eNews story of the food forest at St. Mary’s church in Fredericton. Recently, the congregation and partners gathered to plant fruit trees, berries, nut trees, perennial vegetables and herbs for those who could use it.

It creates a beautiful spot, produces food for those in need and invites a community to harvest and share it.

“That’s about justice. All those things are the character of God,” he said. “There are all kinds of ways to do the work of God — representing God to people so they might find peace, joy, and justice of God.

“All of us have this diaconal responsibility as part of the Body of Christ,” he said.

During the consecration, Sharon’s good friend, Sandra Currie, and Douglas were her presenters. Ella Roberts, Sharon’s granddaughter, vested her.

David presented her with her ordination certificate and licence. Sharon will continue her ministry in the Parish of Kingston.

PHOTO CAPTIONS
1.  Sandra Currie was one of Sharon Arbeau's presenters. She is shown at left with Sharon and Archbishop David Edwards during the presentation.

2. Archbishop David presents the Rev. Sharon Arbeau to the congregation as a newly ordained deacon.

3. Archbishop David during his sermon.

Kingston And The Kennebecasis
Trinity, Kingston

Rita Pledge about 1 year ago

Congratulations to Sharon on her ordination! Rita and Christina, from The Catholic Bookstore.

John & Suzanne Johnston about 1 year ago

Congrats on your ordination! Looking forward to reconnecting!